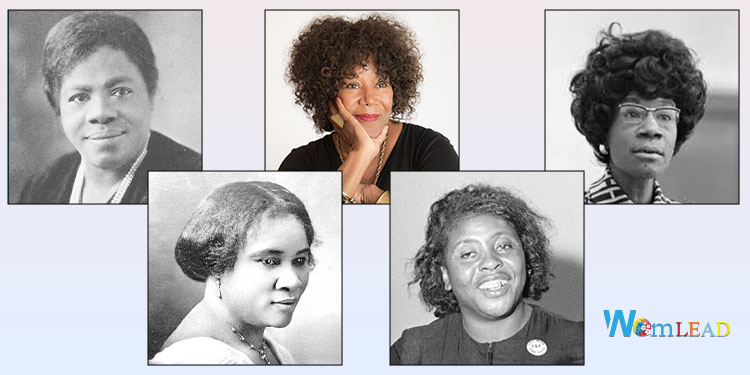 Time after time there have been female Black figures and voices that society has deemed “important enough to remember”. The stories of such Black women are full of inspiration for all – and we list our top 10 examples of famous Black women in history who you can learn about this Black History Month.

Black History Month is a time for recognizing and celebrating the countless stories of triumph of noteworthy Black voices from history. The fact that such a list can never be complete without mentioning famous Black Women shows how much female Black figures have continued to contribute to society.

2. How Black women have contributed to society

While racism never completely faded out, female Black figures have never failed to amaze us either. A number of famous Black women in history have emerged as leaders with significant contributions in fields such as politics, science, healthcare, and entrepreneurship.

From contributing in the math for sending the first man to the moon to being some of the most celebrated performers and entertainers of today, these famous Black women have established their undeniably important role in contemporary and modern society.

3. What makes their contributions so notable

Most Black women, especially from contemporary and older times, faced struggles such as racial stigma and gender stigma. But rather than giving in to such a long-standing perspective in society, many of these women went on to change not only the world around them but also the world overall.

Such feats and accomplishments of Black women throughout history serve as inspiration for all. Whether it’s your kids or your friends, remembering their achievements is important for Black History Month celebrations.

Black women have always played a pivotal role in the evolution of society. Therefore, any true reflection of modern history is incomplete without mentioning some of the famous Black women in history.

Having worked on a plantation in her younger days, Mary Bethune certainly knew the value of education. Therefore, she became an educator, and motivating young Black children for achieving in their lives became her mission.

Mary Bethune’s story continues to be an inspiration for everyone to this day. In fact, it even lives on in the form of Daytone Educational and Industrial Institute for Girls which she founded in 1904.

Not many people get a patent after their name, but Madam C.J. Walker did. She invented what later became popular as the “Walker Method” for treating baldness and other hair problems. Being one of the first female Black millionaires for America to ever see, her success story is an example of how achieving greatness isn’t hard with the right approach.

Madam C.J. Walker had come from a difficult early life dealing with poverty, early marriage, and divorce. But she left an indelible mark in history as a leading entrepreneur of her time by setting herself apart from the rest.

When coming to Black women who have left a mark, one certainly wouldn’t expect a 6-year-old on the list. But Ruby Bridges certainly left everyone stunned when she had to be escorted out by federal generals after she managed to racially integrate the all-girls school of William Franz Elementary School in Louisiana

One of the prominent civil rights activists of her time, Hamer fought against violent voter suppression that was common at the time. Hamer came from Mississippi and always encouraged the African American population of the south to exercise their right to vote.

Hamer eventually went on to found the Mississippi Freedom Democratic Party. In this way, she was able to cement her name as one of the leading Black women of her time who has changed the world around them for the better.

Chrisholm made a milestone in 1968 by becoming the first Black woman to be elected to Congress. In her next 14 years of representing New York, she strongly advocated education and child welfare, thus changing the world with the strength of her spirit.

5. 5 Black women that are changing the world today

While there is no dearth of famous Black women in history, the world continues to see newer names in the list of Black women that are taking the world by storm today. Here we list of those famous black women you should follow.

Michelle Obama certainly won hearts with her show of warmth and strength as the First Lady of America from 2009 to 2017. In fact, her aura of positivity is enough to inspire the youngest and oldest of generations alike – which Mrs. Obama still continues to do through her books and podcast.

With 79 Grammy nominations in the bag, Beyoncé certainly has amassed monumental success as one of the famous Black women singers of modern times. After all, not every pop star gets to perform at the Super Bowl twice, but Beyoncé did!

Having a loyal fanbase that knows her as “Queen B”, Beyoncé continues to draw hearts and set the inspiration for generations to come. As a great example of how Black women are changing the world today, her story is certainly relevant to Black History Month celebrations.

With 23 Grand Slam titles in the bag so far, Serena Williams along with her sister Venus has outshined an entire class of athletes with her strength, agility, and skills. In fact, her total victories are greater in number than those of any other female tennis player.

The story of this famous tennis player is a fun and exciting tale of how a Black woman athlete has succeeded in captivating the hearts of a much broader fan base. Since she has also worked on the ‘Simpsons’ and ‘My Wife And Kids’, Sera is also emerging to compete with the most famous Black women actors of today.

For the Black History Month celebration this year, it is noteworthy that the Moderna vaccine for COVID-19 that the world is turning to was developed by a female African-American woman – Dr. Kizzmekia S Corbett.

As a 39-year-old viral immunologist and researcher, Dr. Kizzmekia has already established herself as one of the famous Black women scientists of today. As the lead scientist on the team responsible for a vaccine designed to save lives from a pandemic, she has become the new inspiration for kids and younger people

Female Black figures have always contributed to the development of science and civilization, and Katherine Johnson is another classic example of famous Black women scientists. In fact, her work in mathematics was pivotal in helping NASA successfully send the first man to the moon.

No Black History Month celebration is complete without remembering some of the famous Black women in history and in modern times. The spirit and fight these women have put up against hardships of life has astounded us before – and shall continue to do the same.

10 Historic Black Figures You Should Know About