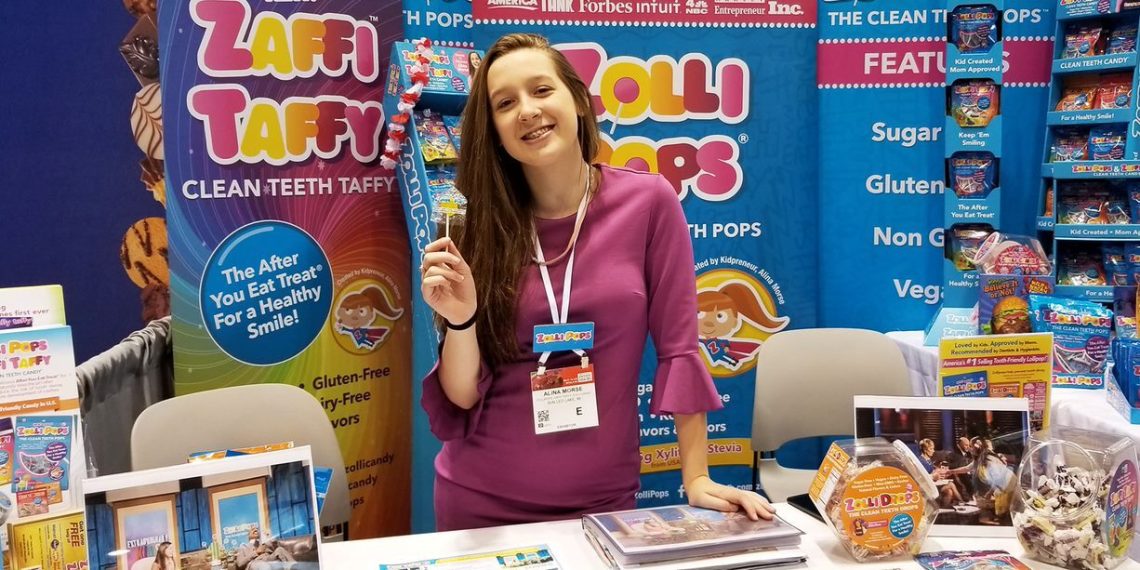 For a 13-year-old Alina Morse, success comes in packages, like being the youngest person on the planet to be featured on the cover of Entrepreneur magazine. Coming from a typical background, Alina has proved that age is just a number for anyone who is prepared for success in business and work.

Alina has seen far greater success than most people can ever dream of. As CEO of a million-dollar company, managing six employees and brainstorming critical brand strategies doesn’t faze Alina. She does it well in style, with even an “idea binder” to keep all her business-related ideas intact!

As the founder, CEO, and the brain behind Zolli Candy, Alina Morse has products selling in over 25,000 retail stores in America. She says that, even as a toddler, she knew that she wanted to be an entrepreneur and CEO. All she needed was a catalyst – which she found in the most common things.

When Alina was barely nine years old, her dad told her that she couldn’t eat candy because it would damage her teeth. It’s probably something that every kid in elementary school has heard at least once. But for Alina, this did not mean no as an answer.

She wanted a way for everyone to enjoy candies without worrying about damaging their teeth. It was an innocent and curious sentiment for a child but combined with Alina’s strong will; it gave birth to her million-dollar idea – Zolli Candy, or “Zollipops.”

After discovering the ill effects of candy on teeth, Alina quickly turned to YouTube. She wanted to make her candy that was “good” for teeth. And she knew that she needn’t go far for a cooking recipe – the free-for-all platform of YouTube was all Alina needed.

She learned that candy and other sugary foods damage teeth by leaving a sticky acid residue on them. Therefore, cooking natural ingredients together meant that Alina could balance the pH and acidity.

And that’s what Alina Morse did.

After several hit-and-trial attempts and refusing to give up, Alina finally nailed the recipe in her kitchen. She decided to call the candies “Zollipops” – a catchy name for what she considered an alternative to lollipops. And she knew it was the recipe for business.

Alina Morse had found the recipe for self-made candy, but she still had to sell her Zollipops in the market.

She realized that this was the right time to put her savings of $3,750 from birthday and holiday gifts to good use. She persuaded her dad, Tom, to help her with an equal amount. Together, they scouted the local area and found a factory in Michigan that was willing to manufacture and package Zollipops on a large-scale.

By this time, Alina had also come up with recipes for hardy candy and chewy candy versions of Zollipops.

After selling over 70,000 of these in the first year, Alina was able to get Whole Foods, a major retailer, to start selling her Zollipops in their stores. This move made sales and revenues rise steeply and double every year for the next four years. In 2018, Zollipops made a whopping $6 million in sales alone.

Alina’s Zollipops was finally a hit.

Alina was soon treading on more prominent businesses, from meetings with CEOs of significant candy companies such as Tootsie Roll to meeting the iconic Michelle Obama herself.

But one thing that Alina would commonly observe was that the people sitting behind the desks selling candies weren’t what she had pictured. None of them were quite the demographic their candies and other products targeted. And that seemed odd to Alina.

It didn’t take long for Alina to see that female or child CEOs weren’t the norm in the business world. But as she states, in her own words, she stepped into the scene to see “who can make a difference.” And whether it was sales or fame – she did.

What made Alina Morse’s success  exceptional

Being the first sugar-free candy ever invented and sold, Zollipops were meant for all. But for analysts of the market, there were specific reasons for the monumental success of the Alina Morse Zolli Candy brand.

Inspiration from her success story

For Alina Morse, age was just a number. She took herself seriously and soon saw herself sitting head-to-head with top CEOs and other important people, including Michelle Obama.

Her success story proves that despite what anybody thinks, being labeled as a “female,” a “child,” or anything else can’t deter you from finding success. You need a fighting spirit coupled with outside-the-box thinking – just like Alina Morse.