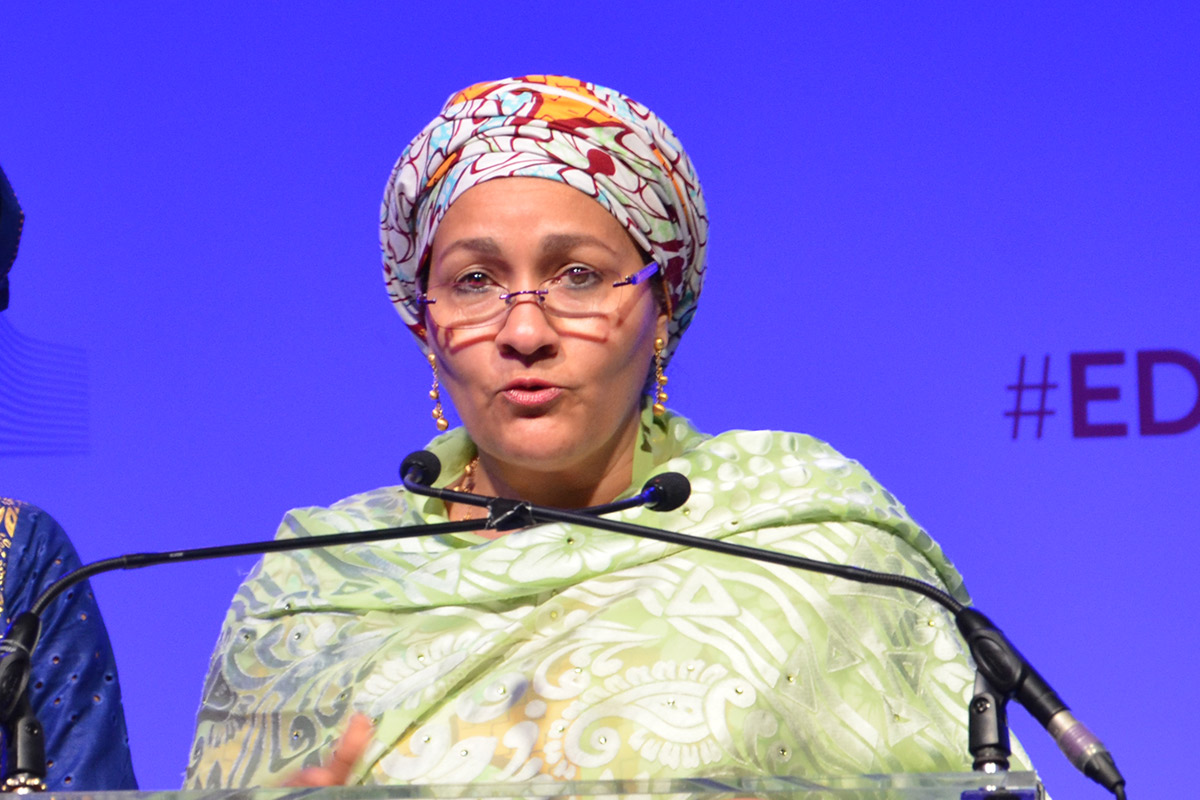 Amina Mohammed: The woman who understands the pulse of the world

“It’s not being handed to you on a platter.” — Amina Mohammed

Not often does the world, battling with an endless number of issues, find women leaders deliver from the highest pedestal. But whenever it has seen women donning the mantle of leadership and delivering, it has not stopped short of celebrating the moments. A number of countries led by women leaders (New Zealand, Denmark, Germany and many others) were found to be doing great in dealing with the coronavirus pandemic and this was something that left a positive impact all around. And this achievement was appreciated by another top global woman leader — Amina J Mohammed — the deputy secretary-general of the United Nations.

In July, Mohammed stressed on this issue while addressing ‘Women Rise for All’ — a virtual gathering of influential women leaders from across geography, sectors and generations — to see how their leadership is helping the pandemic response and recovery that is benefiting all people.

“Over the past months, people around the world have come to see what many of us already knew: women’s leadership makes a profound difference. The evidence has shown — in country after country — how governments led by women are more effective in flattening the curve and positioning for economic recovery,” Mohammed, 56, said.

The veteran leader also said that efforts are on to shape the way leadership is defined. “And ensure that we emerge from this pandemic with women leading, in equal numbers, and equal partnership,” she added.

Mohammed, who has been serving as the No.2 at the UN and the third woman to do so out of five post-holders so far, was a key player in the Post-2015 Development Agenda process to define the future global development framework that would succeed the Millenium Development Goals. She is a great believer in the youth serving as a potential catalyst for changes but also feels that they face great hurdles in the way towards realizing their potential.

Mohammed, who recently made to the list of 100 Most Influential African Women, is a Nigerian-British who was born in Liverpool, England, on June 27, 1961, to Nigerian veterinary officer and British nurse. Eldest of five daughters, Mohammed went to a primary school in Nigeria’s Kaduna and Maiduguri and then the Buchanan School in the Isle of Man. She then attended Henley Management College in 1989 and her father wanted her to be back in Nigeria after she completed her studies.

Mohammed, who served as Nigeria’s minister of environment between November 2015 and December 2016 before starting her stint at the UN, once told The Guardian that she had to raise money herself for studying hotel catering management in Italy because her father clearly told her that he had no money.

It was just the beginning of a world-defying journey which was not easy. Mohammed told the Guardian months after making it to the UN that she went forward step by step and used the education she had to make the difference. From a primary school by Lake Chad to the United Nations — which despite its shortcomings still is a symbol of hope for the global South — it was a marathon she indeed covered.

The journey has indeed been long, all the way from a primary school by Lake Chad to a place at the side of UN chief António Guterres, torchbearer of a sprawling organisation that, for all its very publicly displayed weaknesses, is of such vital importance to the global south. She responded to her father’s call to return to Nigeria but there was no job for her even if her father had promised her one at the American consulate in Kaduna. The journey for her was quite tough at that point of time as she had to compete hard for survival in male-dominated job world.

After working in the private sector for many years, Mohammed served under a number of Nigerian presidents before becoming an adviser to former UN secretary-general Ban Ki-moon, the predecessor of the current office holder Antonio Guterres.

Mohammed has also taken a lead role in the battle against climate change. Especially with President Donald Trump denying repeatedly that there is any problem called climate change, the challenge of people like Mohammed has become even tougher but she has not given up the hope.

“Remember when everyone was smoking everywhere, whether it was in a plane or a train or in restaurants, and we thought we shouldn’t do that anymore and stopped smoking in public places? The minute that science proved smoking would have an effect on the pregnant woman next to you, your conscience, the moral imperative, was for you to drop the cigarette and walk outside. So I think there is a collective responsibility for major emitters, and that underpinned everything we did in Paris,” the mother of six children was quoted by the Guardian.

Mohammed once told the Financial Times in an interview that late UN secretary general Kofi Annan was among her mentors and that she is a politically committed individual. “The secretary-general [ António Guterres] told me a moral imperative is the motivation to take the job. We need all sorts of political skills to move the agenda in the space that we have, in order to leave the UN better than we met it. Politically, I am fully committed. If I cease to be useful in trying to achieve the secretary-general’s vision, I go home,” she said. Quite clear in her viewpoints.

Things one can learn from Amina Mohammed:

Having a complete outlook:

Amina Mohammed is a woman of many sides. She is one who is not only involved in the political but is also focused on social issues. Between 2002 and 2005, she coordinated the Task Force on Gender and Education for the United Nations Millennium Project. For aspiring women leaders, this is something worth learning — to have a 360-degree outlook on how to strive towards development.

Mohammed’s kind words for the women leaders of the world in fighting Covid-19 is a positive gesture that all aspiring women leaders and entrepreneurs need to appreciate. In a world where women’s representation at the top is still not a common occurrence, such backing means a lot for those women trying to make a place under the sun.

Speaking for the youth:

This world certainly belongs to the new-generation youth and it is very important to understand their problems and how they perceive the future. Global leaders need to back these youth as Mohammed does. This is one of top features of a good leadership.