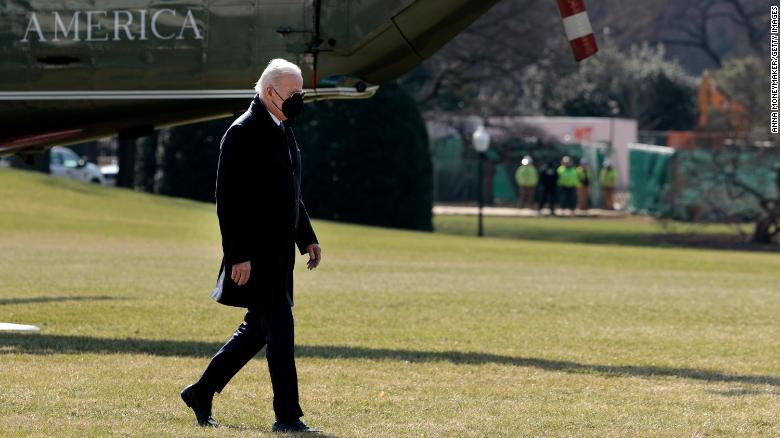 WASHINGTON, DC - FEBRUARY 28: U.S. President Joe Biden walks on the South Lawn of the White House after returning on Marine One from Delaware on February 28, 2022 in Washington, DC. President Biden spent the weekend at his family home in Wilmington, Delaware, where he attended the funeral for Joan Olivere, the mother of his daughter in-law Hallie Biden. Later this week President Biden will give his first official State of the Union address. (Photo by Anna Moneymaker/Getty Images)

President Joe Biden celebrated Black History Month at an event organized in the White House on Monday. On the occasion, he celebrated his decision to nominate Judge Ketanji Brown Jackson, the first Black women to the United States Supreme Court bench. At the same time, the President urged the Congress to pass the voting right legislation.

Biden nominated Judge Jackson to the Supreme Court post vacated by the retirement of Justice Stephen Breyer on February 25. Addressing the gathering on the occasion, the President said, “Jackson is an incredible woman,” adding, “We have nominated more Black women to the federal bench than any previous administration in the history of the United States.

The President accepted the fact that his administration is faced with an uphill task to get the legislation on voting rights passed as the Senate is divided on the issue. Nevertheless, Biden vowed to work to protect “the country’s threshold liberty, the sacred right to vote, which he has never seen under such attack.”

“We have directed the federal agencies to promote access to voting. We have appointed top civil rights advocates to assist the US Department of Justice, which had doubled the number of voting rights enforcement folks on their staff. We again call on Congress to pass the John Lewis Voting Rights Act; pass the Freedom to Vote Act. I think we can do this.”

Prior to Biden’s speech, Vice President Kamala Harris referred to Jackson’s “swift confirmation,” saying, “I don’t have to tell everyone here – she has been confirmed on a bipartisan basis thrice, and, therefore, deserves swift confirmation.”

In the midst of the conflict between Russia and Ukraine, President Biden was expected to attend only the Black History Month celebration in the presence of the media. As Biden wrapped up his remarks, a journalist asked him if the American should be worried over the prospect of a nuclear war, he said “No”, before leaving the East Room.

Vice President Harris, however, made brief remarks on the situation in Ukraine. She described the situation as “a critical moment in the history of our nation, and our world.” “Today, the eyes of the world are on Ukraine and the brave people who are fighting to protect their country and their democracy. And their bravery is a reminder, a most recent reminder, that justice, equality, and freedom must never be taken for granted by any of us,” Harris added.

It is worth mentioning here that President Biden has always touted the gender parity and diversity of his Cabinet. For instance, retired Army Gen. Lloyd Austin is the first-ever Afro-American person to head the Defense Department, while Kamala Harris is the first-ever Black as well as person from South Asian origin to become the US Vice President.

Since the commencement of Black History Month on February 1, the White House has organized several events to mark the significance of the month. The Biden administration had also convened a roundtable discussion with the Black Cabinet members and organized an exhibition to focus on the accomplishments of Black Americans in the United States. The exhibition is on display at the Executive Residence.