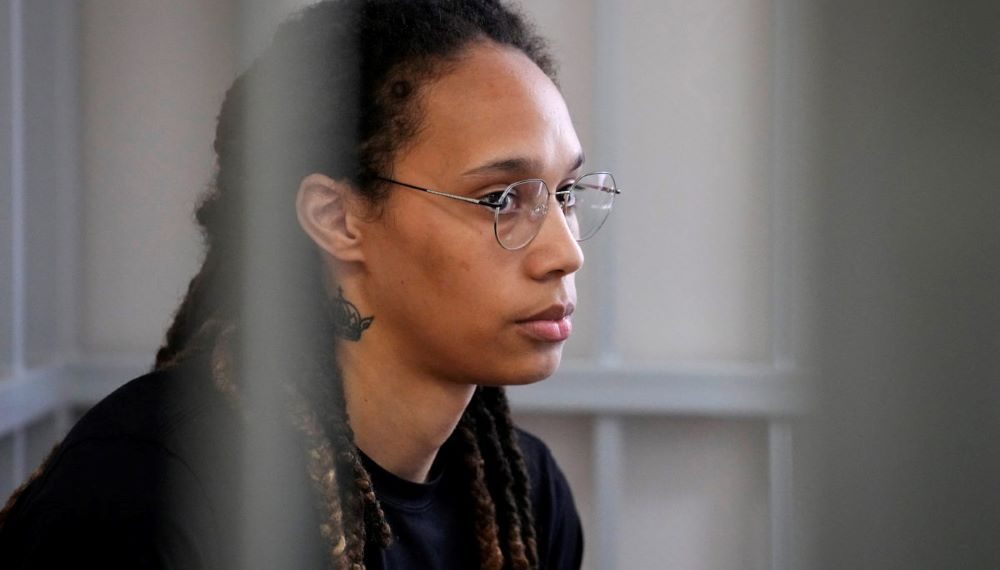 WNBA star Brittney Griner, who is facing a nine-year prison sentence in Russia on drug charges, was denied the appeal on Tuesday by a Russian court.

Griner appeared virtually at the hearing and urged the court to reconsider her sentence and said that people found guilty of smaller crimes than her were given shorter sentences. The sentence that Griner was handed on August 4 this year by a Moscow-area court was in addition to the six months that she had already spent in custody after having been detained in February this year. Her attorneys filed an appeal on August 15.

“I beg that this court re-evaluates all the stakes that were overlooked in the first place and reassess my sentence,” Griner said, while apologizing for her “mistake.” She further added that being away from the family had been a very “traumatic” experience.

Griner, 31, a native of Houston, played professional basketball for Phoenix Mercury and was detained in February this year at Sheremetyevo International Airport in Khimki. According to her defense, Griner was carrying 17 vape cartridges containing hashish oil in her luggage only because she was prescribed medicinal cannabis by the physicians back in Arizona. Despite this, Griner pleaded to the court that she did not want to break the law and was handed a rigorous sentence. Many argue that Griner became a scapegoat following the US objection to Russia’s military campaign in Ukraine.

Griner pleaded guilty to drug charges in July this year, saying that the cartridges in her luggage were a mistake and she had no “intention” of breaking Russian law.

As the US is trying to secure the WNBA star’s freedom, Griner’s attorney told news outlets earlier this month that the basketball player is worried that “she may not be released.”

“She is not hopeful for the appeal because the first court decision showed that the case is unjust even by present Russian standards, and therefore, we are not hoping for a big release, yet of course, we hope for the best,” Boikov had previously told the media outlets while anticipating the results of the appeal.

Brittney Griner turned 32 on October 18 this year behind bars in Russia. Apart from speaking on the phone with US officials, she was able to spend a couple of hours with her lawyers, who conveyed birthday messages to her.

“Thank you, everyone, for fighting hard to get me home. All the support and love is greatly helping me,” Griner said, in a message shared via her attorneys.

On May 3 this year, the US government classified her case as “wrongfully detained,” which means that the country will aggressively work to negotiate the WNBA star’s release. The State Department has said that it does not matter how the legal case against Griner plays out, the government of the United States will still try to secure her release.

Ned Price, the spokesperson for the State Department, commented earlier this month that securing the release of Griner and Paul Whelan – another detained American since 2019 – remains a top priority for their administration.

Born Brittney Griner Yevette Griner on October 18, 1990, in Houston, Texas, Griner is one of the eleven women to receive an NCAA championship, an Olympic gold medal, a FIBA World Cup gold medal, and a WNBA championship. During college, she played basketball for the Baylor Lady Bears in Waco, Texas, and is the only NCAA player to score both 2,000 points and block 500 shots.

In 2012, she received the Best Female Athlete ESPY Award and was named the Most Outstanding Player of the Final Four and A.P. Player of the Year. She was also named the nation’s No. 1 high school women’s basketball player by Rivals.com in 2009. At the Rio Olympics in 2016, she was on the US women’s Olympic team and led them to victory. In 2021, Griner was again on the women’s national team during the 2020 Olympics and won the second gold medal.

In 2020, Griner said that she does not believe that the national anthem should be played at sporting events. She called for the WNBA to stop playing The Star-Spangled Banner, the national anthem of the United States, before the games. Her remarks came after Mercury players refused to take the floor during a pre-season game in Bradenton, Florida. In her defense, Griner added that it was in protest against the killing of Breonna Taylor and as part of the wider George Floyd protests.

Griner continues to flaunt her disregard for traditional gender roles as she often models clothes branded as “menswear” for Nike. Her endorsement deal with Nike was the first that the company signed with an athlete who was openly gay.

On February 11, 2013, Griner came out as gay in an interview with SI.com. Earlier, she had come out to her parents in high school, and her father did not take it gracefully. He forced her to live for six weeks with an assistant coach. Later, to address bullying and self-acceptance, she wrote a memoir with Sue Hovey, In My Skin: My Life On and Off the Basketball Court, which was published in 2014.

In 2014, Brittney Griner was engaged to another WNBA player Glory Johnson, but in 2015, they were both arrested on charges of assault after police responded to a fight between the two. WNBA suspended both Griner and Johnson for seven games following Griner pleading guilty to disorderly conduct. She was also asked to complete 26 weeks of domestic violence counseling. Despite the incident, the couple got together again and married the same year in Phoenix, Arizona.

The couple lost it again when only after a month, Griner filed for an annulment citing fraud and duress. The divorce was finalized in 2016. Meanwhile, Johnson got pregnant with twins through in-vitro fertilization using Griner’s eggs. Brittney Griner got engaged again in 2018 to Cherelle Watson, and they married a year later. Watson also changed her name to Cherelle Griner.

During her trial in the past few months, Cherelle has continued to support her wife from afar and often shared videos of Griner’s time in court on social media. “Thank you to everyone who has reached out to me regarding my wife’s safe return from Russia,” Cherelle wrote on Instagram in March 2022.

After the sentence, as Griner left the court, she told the media that she loved her family. Prior to the verdict, Griner had apologized to the court and asked for leniency. “I never meant to put in jeopardy the Russian population; I never meant to break any laws here. I made an honest mistake, and I hope that your ruling does not end my life here. I know everybody keeps talking about political pawns and politics, but I hope that is far from this courtroom.”

In an interview with CNN, Congressman John Garamendi assumed that it would be “very difficult” to get Griner out of Russia. Many high-ranking US officials and experts have expressed their concern that Griner is being used as a “high-profile hostage” by Russia and as leverage against western sanctions following the country’s invasion of Ukraine.

There are speculations that the United States may soon organize a prisoner exchange, where Griner and Paul Whelan would be returned in exchange for Russian arms trafficker Viktor Bout. Though the diplomatic relationship between the United States and Russia was stymied by the Ukraine war, it remains to be seen whether prayers and good wishes would work in Griner’s favor and whether she would return home after surviving yet another storm in her life.

Why Attitude is Everything: The Importance of Attitude in Business Growth