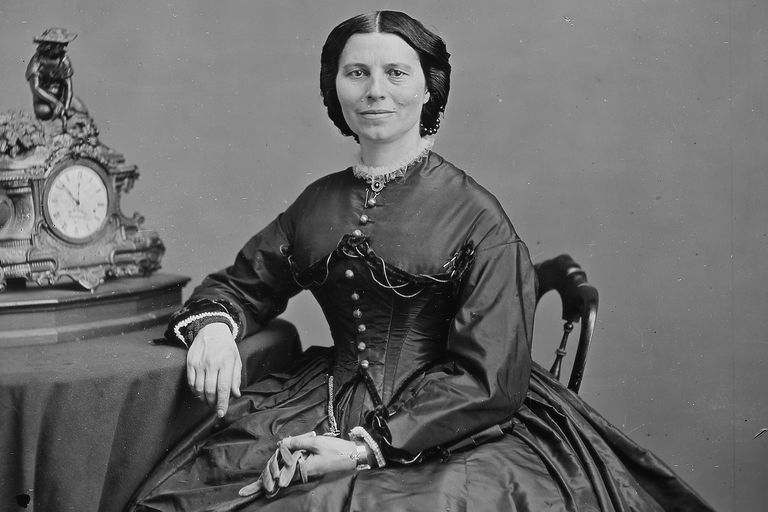 Clara Barton: A humanitarian soul with an iron personality

Clara Barton: A Humanitarian Soul With an Iron Personality

” I may be compelled to face danger, but never fear it, and while our soldiers can stand and fight, I can stand and feed and nurse them.” – Clara Barton

Women have excelled as leaders in humanitarian endeavors throughout history. They have always been revered as symbols of empathy and their legacy has influenced people across the globe. In the annals of the world’s history of humanitarian excellence, Florence Nightingale has been one iconic name. But while she was at the other side of the Atlantic, Clara Barton, a contemporary of the ‘Lady with the Lamp’, was the one who matched her fame on this side.

Clarissa Harlowe Barton or “Clara” Barton was the founder of the American Red Cross and one of the most iconic women leaders that the US has produced in its history. Barton was born on Christmas Day in 1825 in North Oxford, Massachusetts, to Captain Stephen Barton and Sarah Stone Barton. It was her father’s profound influence that had made Clara a patriot and humanitarian. A very shy child, Clara excelled in reading and spelling at school. It was only at the age of 10 that Clara had her first stint with nursing as she catered to her injured brother who had fallen from a barn and got hurt in the head. She went to the Liberal Institute in Clinton, New York, in 1850-51 and next year, she set up a free school that soon became big. Clara’s strong sense of self-dignity became evident when she refused to agree that a male principal was needed to run the school and quit. She was employed by the US Patent Office in Washington DC where she served in the 1950s and early 1960s.

Clara and the American Civil War (1861-65): It was during Clara’s stint at the patent office that the Civil War started. Like many other women of the time, she also helped in collecting bandages and other supplies but she also went a step further. She understood that she could provide even better support to the soldiers by personally visiting them in the battlefield. She acted accordingly and while risking her life, nursed and cooked for the injured troops, earning the nickname “Angel of the Battlefield”.

As the war approached its end, Clara spent much time writing to the kin of the soldiers who went missing. She eventually handled 63,000 letters! Clara did not forget those who died in the war either. She helped in setting up a national cemetery around the graves of the Union soldiers who died in horrific conditions in the Andersonville Prison in Georgia. Clara succeeded in identifying graves of nearly 13,000 soldiers.

After the war got over, Clara went to Europe for a break where she came to learn about the Switzerland-based Red Cross, a humanitarian body which sought international agreements to protect the sick and injured at the time of war and for setting up national societies to aid voluntarily and neutrally. In 1869, Clara came to know about Henry Dunant, the founder of the International Red Cross. She took to distributing war reliefs during the Franco-German War of 1869-70 and after returning to the US, she fought to make the US a signatory to the Geneva Convention (1864) that dealt with the well-being and honor of those affected by battles and died in them. Clara formed the American Red Cross (now American National Red Cross) in 1881 and continued at its helm till 1904 when she was 83-years-old. She came up with her autobiography titled ‘The Story of My Childhood’ in 1907 and on April 12, 1910, she died at Glen Echo in Maryland, where she spent the last 15 years of his life, at the age of 90. Clara’s other books included: ‘History of the Red Cross’ (1882) and ‘The Red Cross in Peace and War’ (1899).

Clara made her organization work on all sorts of disaster relief: from fire to floods which marked a contrast with Dunant’s original focus on wartime relief. But Clara became famous for her expansion of her organization’s scope which came to be known as the American Amendment to the Geneva Treaty.

Legacy of Clara Barton: The legacy of Clara, who in 1865 was requested by then president Abraham Lincoln to help in searching for men who went missing in the Civil War, is far too great. She was not just a nurse professionally. In 1898, when the Spanish-American War happened, Clara took the initiative to help war victims with relief materials in Cuba and she was 77 at the time.

Clara’s life story progressed amid all sorts of challenges. They were not just physical ones found in the battlefields but also in the form of social obstacles. She was known for her iron will which had made it uncomfortable for the male-dominated world around her but she never compromised with gender inequality. She was as determined to challenge the gender injustice as she was in serving others.

Clara’s history has served as an inspiration for generations of not only nurses and doctors but also teachers, social workers. Even the new-age corporate executives and public servants learn lessons from the woman’s leadership qualities that she displayed resolutely. She was even caring about racial equality — an aspect that was often challenged in the years that followed the Civil War.

Clara’s relentless functioning in war conditions also proved how organized she was in her work. When surgeons had very little resources at their disposal in battlefields to attend to the injured, Clara did not have a problem getting ready even at half-an-hours’ notice. She considered the Union Army her family but she never ignored an injured soldier, irrespective of the side he fought for.

The humanitarian Clara, like any other human being, had a complex personality who never wanted to delegate authority and which put her at odds with the authorities. But she was a great speaker who could convince people with emotional appeal. The visionary in her still shapes the ideals of the organization she started more than a century ago.