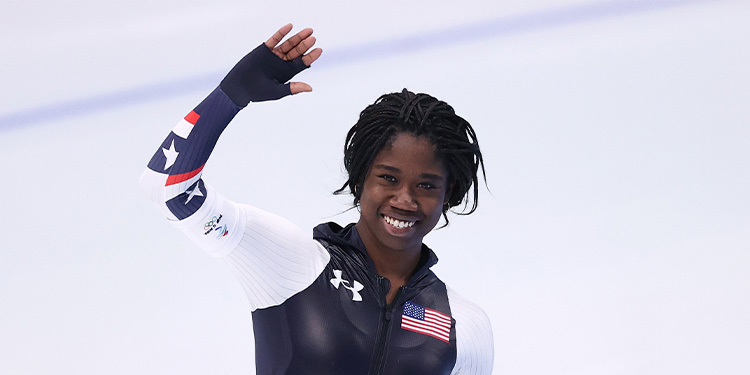 Erin Jackson became the only Black woman to win a gold medal in the Pyeongyang Winter Olympic Games in Beijing speed skating event, earlier this month. Jackson had almost missed competing in the 500m at the Olympics after she had slipped during qualifying trials. However, the dreams of the 29-year-old world No. 1 were realized after her teammate and friend Brittany Bowe gave up her position to enable Jackson to go to Beijing.

At the time, Jackson praised Bowe, calling her an “amazing friend, teammate, and mentor.” This is an act I’ll never forget,” she wrote. “You can bet I’ll be the loudest voice in the oval cheering for her in the 1000 and 1500 next month.”

According to NBC News, Jackson, a former inline skater, had crossed the ice just prior to the 2018 Pyeongchang Olympics. Now, Jackson, a native of balmy Ocala, Florida, has joined fellow American Shani Davis as the only two Black athletes to win speedskating medals at the Olympics.  Jackson’s win is significant because she is reportedly the first American woman to win an Olympic medal in speed skating since 2002 and also the first American woman who won a 500-meter Olympic gold since 1994.

Jackson skated to the gold in 37.04, 0.08 seconds in front of Japan’s Miho Takagi (37.12) and 0.17 seconds ahead of the Russian Olympic Committee’s Angelina Golikova (37.21). As soon as her skates crossed the line, Jackson’s head turned toward the scoreboard. She broke into a big smile when she saw the “1” beside her name. Her coach, Ryan Shimabukuro, pumped his arms and slapped her hands as she glided by. While one pairing was still left, Jackson knew she could do no worse than bronze.

After her stunning victory, Jackson said that she hopes the milestone she reached as the first Black woman to earn an Olympic speedskating medal is “just a stepping stone” for more athletes to come. “It would be awesome if I wasn’t the first, but I’ll do my best to be a good example.”

From an amateur to Olympian, Jackson grabbed national headlines when she qualified for the 2018 Winter Olympics just four months after first taking up speedskating. She created history then too by earning third place in the 500-meter race at the U.S. Olympic Speed Skating Trial, the first Black woman to secure a spot on the long-track team.

During the current World Cup season, Jackson suddenly emerged as one of the world’s best sprinters. She won four of eight 500 races – the first Black woman to earn one of those titles, as well – and came to the Olympics as one the favorites. She lived up to the billing in Beijing, becoming the first American woman to win an individual Olympic medal since 2002.

Jackson is a 10-time world-champion inline skater and is a former roller derby player competing with the New Jax City Rollers, who switched to ice in February 2017. The Florida native also earned a graduate degree in materials science engineering from the University of Florida. She hopes to return back to school to pursue her master’s degree.