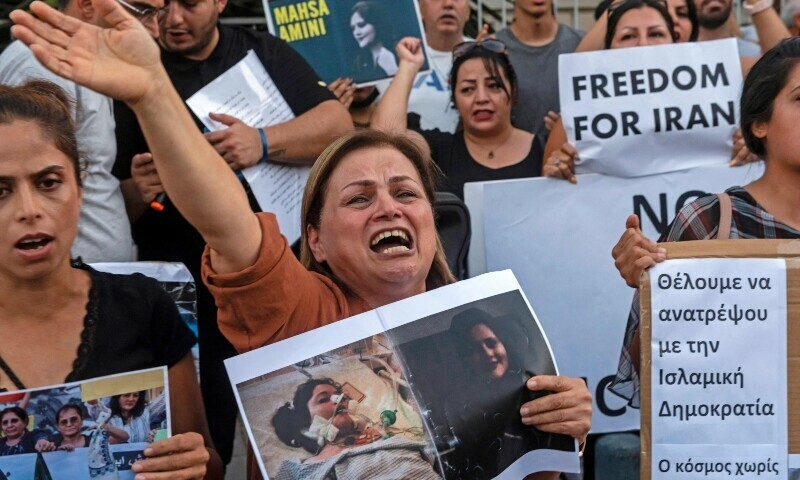 The European Parliament on Thursday slammed the Iranian government for repressing the rights of women protesters and creating an atmosphere of fear in the country for women.

The majority of the Members of the European Parliament (MEPs) voted in favor of the resolution, which “condemned in the strongest terms” the killing of 22-year-old Mahsa Amini “in the aftermath of her violent arrest and ill-treatment by the country’s morality police. The European Union parliament called on the Iranian government launch an “impartial and effective investigation into Amini’s death.

Following Amini’s death in government custody, anti-government demonstrations have been taking place all across Iran, with unprecedented incidents where many women removed their headscarves and cut their braids in defiance of the country’s religious laws. Various rights groups, in both Iran and outside, estimate that the police forces have killed at least 100 people during these demonstrations and arrested hundreds of thousands.

“Human rights are not negotiable,” Ernst said, in her statement following the vote. “There is a longing for a free, just, and democratic Iran in the people of that country, and it is gripping more and more. The European Union Parliament stands by their side.”  The resolution has also urged the European Union to put sanctions on Iranian officials who are involved in the crackdown against the protesters in Iran.

It is important to note here that the call to put sanctions on Iranian officials who are involved in the crackdown against the protesters in Iran has support everywhere else, including the foreign ministers of France and Germany, who announced this week that their countries are set to impose sanctions against certain leaders in Tehran.

On Wednesday, Abir Al-Sahlani, a Swedish MEP, chopped her hair in the Parliament building in Strasbourg to show her solidarity with the women in Iran. The Iraq-born MEP chanted “women, life, freedom” in both Kurdish and English before she cut off her braid.

The European Union Parliament also called on the United Nations, in particular the Human Rights Council, to launch an impartial probe into the recent events in Iran. MEPs also implored the EU Member States who have a diplomatic presence in Iran to direct their actions into protecting the women protestors and human rights defenders in Iran, especially those who have been defending women’s rights and those with dual EU-Iran citizens.

On Thursday, the European Union Parliament also adopted a resolution concerning Russia’s aggression against Ukraine. While 26 voted against it, around 504 Members of the European Parliament (MEPs) voted in favor of the said resolution, which called for an increase in military assistance to Ukraine.

Feeling Unmotivated at Work? Here Are Tips to Help You Get Your Stride Back

How to Break Free from Mediocrity and Achieve Big