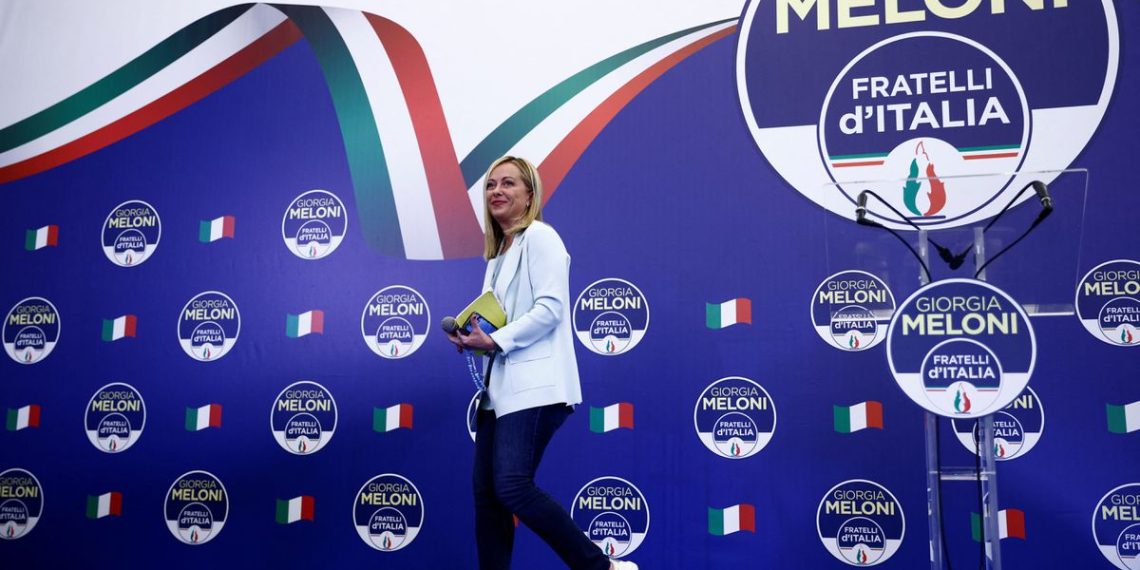 Giorgia Meloni, the premier of the Brothers of Italy party, claimed victory in the Italian general elections on Sunday by defeating Mario Draghi by a huge margin and became Italy’s first female prime minister.

The 45-year-old Giorgia worked her way up from grassroots politics with great success and pace and led the march against Mario Draghi. Draghi was accused of having turned the establishment technocratic, though he succeeded in stabilizing the economy in the aftermath of the traumatic setbacks of the pandemic. Therefore, Giorgia’s far-right political party and its message were accepted by the masses and helped her claim a landslide victory.

Giorgia Meloni ventured into Italy’s crowded political landscape in the year 2006 and then co-founded the Brothers of Italy party in 2012. The party’s agenda is deeply rooted in Euroskepticism and anti-immigration. During the last election in the year 2018, Giorgia’s party claimed just over 4.5% of the vote share, but its popularity seemed to have massively soared during recent years, underscoring the country’s long-standing rejection of rightwing politics.

Celebrating the early results on Sunday evening, Matteo Salvini wrote on Twitter, “Center-right in clear advantage both in the House and in the Senate! It will be a long night, but already now, I want to say THANK YOU.”

Giorgia has espoused contradictory policies to her coalition partner leaders on the issue of Ukraine. While both Berlusconi and Salvini have said they would review sanctions against Russia due to their impact on the Italian economy, Meloni has not wavered in her support for defending Ukraine.

While her run to become the prime minister has been triumphant, Giorgia lacks experience in administration. Therefore, taking the reins of the government at a time when Italy is still recovering may pose a plethora of challenges to her government in the country.

The biggest challenge she faces is mitigating the rising energy crisis in Italy triggered by the Russia-Ukraine war. The growing expenditure due to inflation has forced the European Central Bank to increase the yield on the country’s 10-year bonds to over 4.3%, which was only less than 1% in December last year.

In her victory speech after winning the election, Giorgia said that the win of her party was a starting point and that her government would show its worth in the coming days.

A 45-year-old mom from the Italian capital Rome, Giorgia is an outright conservative, anti-LGBTQ, and has threatened to put same-sex marriage, which was legalized in Italy in the year 2016, under review. She has also been vocal against abortion, calling it a “tragedy,” raising deep fears for the future of women’s reproductive rights in the country. While Giorgia has made history by becoming the first female prime minister of Italy, by looking at her politics, it cannot be supposed that she is interested in advancing women’s rights in the country.

Tricks to Stay Focused If You're Lacking Motivation