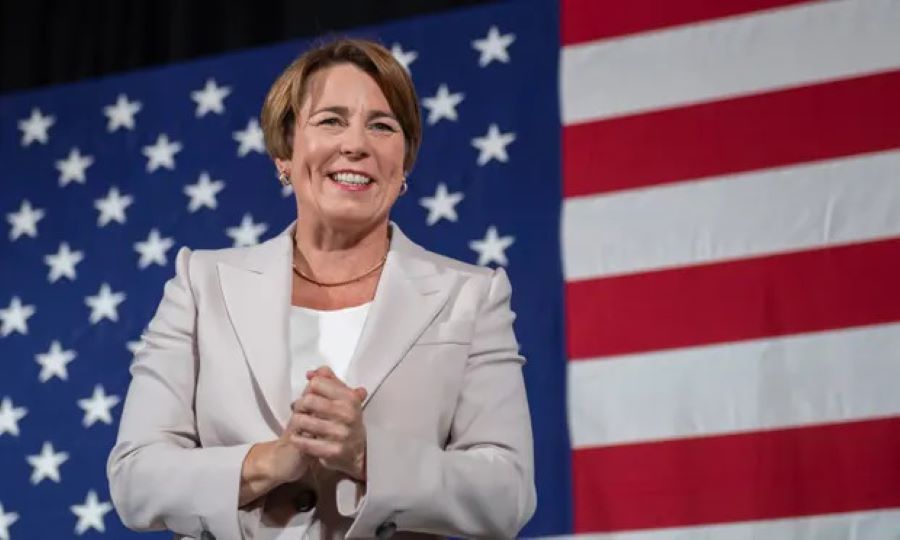 Maura Healey: The Story of a Bold Lesbian Leader

The Governor-elect of Massachusetts, Maura Healey, will not only be the first woman to hold the State’s top office, but she is also the nation’s first openly lesbian politician to serve as a State’s chief executive.

After having served as Attorney General of Massachusetts for two consecutive terms, Healey, 51, defeated the Republican Geoff Diehl and flipped back the office to Democrats after two terms under Charlie Baker.

Healey, along with her running mate and Salem Mayor Kim Driscoll, notched an easy victory from Donald Trump-backed Geoff Diehl, who ran alongside former fellow legislator Leah Allen of Danvers.

Addressing her supporters at a victory party at a hotel in Boston, Maura Healey vowed that she would be “a governor for everyone.”

“I want you to know that I understand your feelings, understand where you are and will do everything in my power to help you because we are all in this together.”

Both Healey and Diehl ran aggressive campaigns that were geared towards beating the rising cost of living in the State, ranging from housing to everyday expenses. However, each took different roads to get there.

Healey said that making the state more affordable is going to be her priority “from day one.”

“I will be a governor for everyone who is struggling with rising costs,” she said. “We will make Massachusetts more affordable so that people may come here, stay here, and grow their businesses.”

Healey also promised tax cuts and said that her office would fix roads and bridges and invest more in education and job training, in addition to tackling the climate crisis and creating clean energy jobs. She also promised to defend abortion access.

“As long as I am governor,” Healey said. “Women will always have the freedom to choose and control their own bodies.”

In her remarks on Tuesday, Maura Healey also took time to address “every little girl and young LGBTQ person.”

“I hope tonight will serve as a reminder that you can be whoever you want to be,” she said, amid cheers from the crowd. “And nothing, and no one can get in your way except your own imagination — which is never going to happen.”

Healey’s win did not come as a surprise—she was regularly shown as a frontrunner since her entry into the gubernatorial race early this year, and she steadily rode that victory to Election Day. With her victory, Beacon Hill’s corner office is going to turn back to Democrats, who already hold a majority in both chambers of the state’s Legislature.

Tina Kotek, another openly Democrat lesbian and former Oregon House Speaker, was on the ballot as well for the position of governor in her home state, but she faced a more challenging race than her Massachusetts counterpart.

Healey’s journey from the basketball court to the governor’s house in Massachusetts is a little under 30 years. Healey, who lives in Charlestown, Massachusetts, still plays basketball recreationally, and it would not be the first time that she would serve as a leader.

Before her foray into the legal and political worlds, she was the captain of the Harvard women’s basketball team, where she played under her longtime Crimson coach Kathy Delaney-Smith between 1988-1992. With Healey playing point guard, the Harvard team won the Ivy League championship in 1990-91. Following the team’s victory, she was picked as co-captain in the year 1991-92. In her senior season, she posted the second-most assists (150) in the history of the program at the time, for which she won the team award for the best defensive player.

Her basketball career also continued after college, where she played two professional seasons in Austria for UBBC Wustenrot Salzburg. She moved on from the sport and enrolled in Northeastern Law School, where she earned a JD in 1998.

Born Maura Tracy Healey on February 8, 1971, Healey has been serving as Massachusetts Attorney General since January 2015. Hired by Martha Coakley, a Massachusetts Attorney General, in 2007, Healey served as chief of the Civil Rights Division. During her tenure in this position, she spearheaded the challenge to the federal Defense of Marriage Act.

Maura Healey has vowed to combat prescription drug abuse and the heroin epidemic in Massachusetts by implementing a “lock-in” program. The program will be laid out in pharmacies to identify and track prescription drug abuse. Her plan also includes the deployment of new resources in the drug trafficking hotspots, improvement of accessibility to treatment, and expand access to Narcan.

Healey’s women’s rights platform has been focused on sex education, furthering access to abortion services in Massachusetts for women regardless of where they live, their occupation, and/or their income. She has also been supportive of a ban on the manufacturing of assault rifles in Massachusetts.

On January 31, 2017, Healey also announced that she was joining a lawsuit that challenged former President Donald Trump’s Executive Order, commonly referred to as the “Muslim ban”. Healey condemned the order and said it was “motivated by anti-Muslim sentiment and not by a desire to improve national security. Eventually, a federal court struck the order on similar grounds. Considered a great favorite in a heavily blue state, Healey is set to take the governor’s office on January 5.

How to Avoid Burnout While Growing a Business