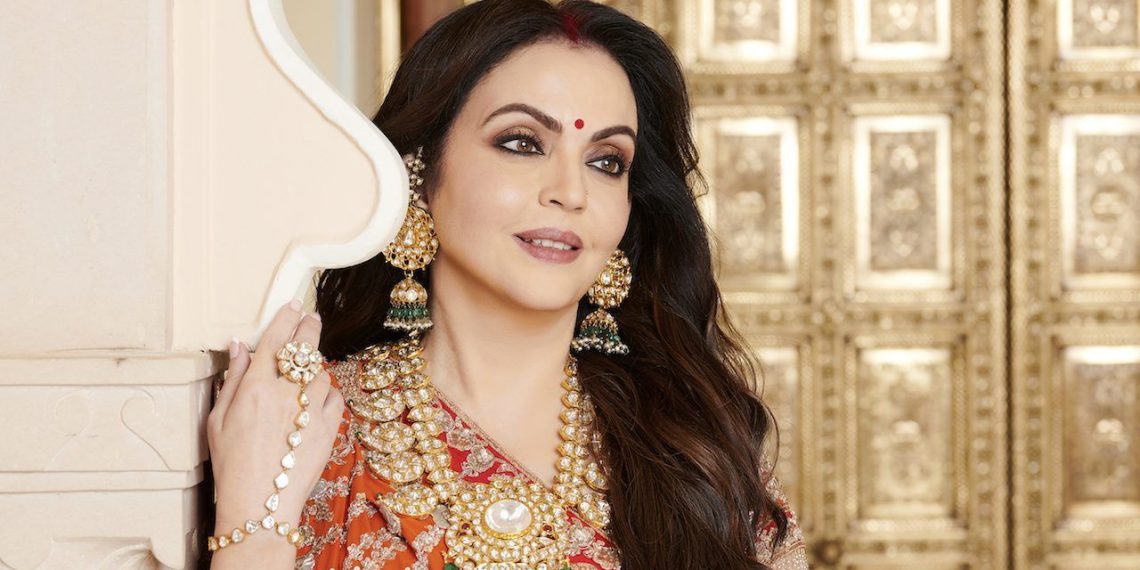 A Philanthropist & Patron of Education and Sports

Nita Ambani (née Dalal), the wife of India’s most prosperous entrepreneur Mukesh Ambani, is a philanthropist, educationist, businesswoman, patron of arts and sports, and a champion of women and children’s rights. She is the founder and chairperson of Reliance Foundation, whose initiatives help to empower women in India with resources and opportunities.

Born on November 1, 1963, Nita is married to Reliance Industries chairman and managing director Mukesh Ambani. From a middle-class beginning, today, the Ambanis are among the richest globally, with a family fortune estimated to be more than $102 billion (October 2021). Nita earned her graduate degree in Commerce from Narsee Monjee College of Commerce and Economics and took up Bharatnatyam (an Indian classical dance form) from an early age. Later, she became a professional Bharatanatyam dancer.

Impressed by Nita’s dance recital at a program, Mukesh’s parents, Dhirubhai and Kokilaben Ambani took a marriage proposal to Nita home, but she kept one condition. She said she was willing to the recommendation provided no one would stop her from working after marriage. The Ambani family agreed with this condition. Nita and Mukesh married in 1985.

Later, in a television interview, Nita shared that she started teaching at St. Flower Nursery in Mumbai a year after she got married. She also shared that her initial salary was just $125 per month.  Nita said that initially, people laughed at her, but Nita got satisfaction doing her work, while Mukesh added that Nita used to give him the salary, and it was used to pay for dinner at home. Professionally,  she has come a long way.

In 2014, Nita left her teaching career and decided to join the family business. She wanted to take the Reliance legacy forward with her husband, Mukesh. Aside from being a non-executive chairman of Reliance Industries, Nita founded Reliance Foundation, the company’s charitable arm, intending to transform rural India.

However, Nita’s love for teaching never went away. She decided to start a school in the name of her late father-in-law, Dhirubhai Ambani – Dhirubhai Ambani International School in Mumbai, which is among the top schools in India today. The school has been ranked the no.1 international school in India for eight consecutive years! Nita has also led the ‘Education for All’ (EFA) initiative as part of Mumbai Indians’ way of giving back to society. EFA has reached over 70,000 underprivileged children and created awareness for education using various media and digital platforms.

On International Women’s Day 2021, Nita launched an inclusive and collaborative digital movement for women called Her Circle. She is also the owner of Mumbai Indians, the most successful cricket team in the Indian Premier League, the founder chairperson of Football Sports Development Limited, which launched the Indian Super League, and the head of the Education and Sports for All initiative for children.

Through Sir H. N. Reliance Foundation Hospital and Research Centre in Mumbai, she is committed to making affordable, world-class medical care available to all Indians. US magazine Town and Country recognized her as one of the world’s top philanthropists in 2020, and Fortune India ranked her as India’s Most Powerful Woman in 2016. Nita is also a great patron of arts and was named to the board of the United States’ largest art museum, the Metropolitan Museum of Art. She has been elected as an honorary trustee of the museum and is the first Indian on the Met’s board in its almost 150-year history.

On June 3, 2016, Nita was among eight candidates nominated for membership in the International Olympic Committee (IOC) by the Swiss-based panel. The election of these new members was held during the 129th IOC Session in the first week of August 2016. Ambani was elected as a member of the IOC on August 4, 2016, its first Indian woman member.

Mariet Ostos – A Heartening Story of Rags to Success

Women Who Brought Us the Moon