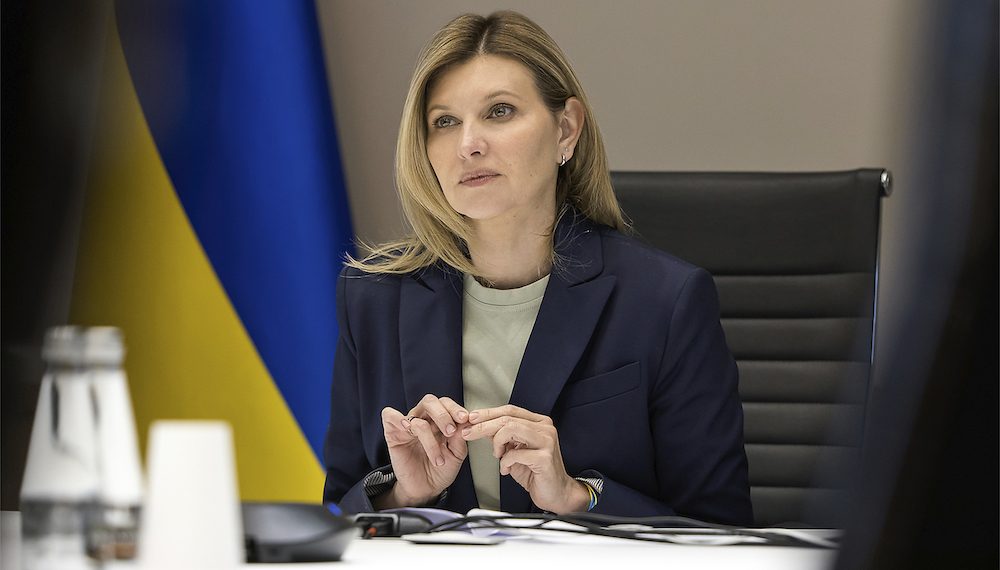 Sit Like a Girl: Ukrainian First Lady sparks a Storm of Opinions on Women-Stereotype

The hashtag “sit like a girl” has been trending on social media after Ukrainian First Lady Olena Zelenska appeared last month on the cover of Vogue. In the picture taken by Annie Leibovitz, the First Lady donned pants and a shirt, with rolled-up sleeves and legs driven apart. The pose in which she sat on a marble stair seems masculine since it is very unconventional for a woman to appear in a picture like that. For the same reason, many critics have expressed their worry about the pose not being feminine enough. Nevertheless, it has given a new dimension to the debate on women stereotyping and again, put the war in Ukraine in the spotlight.

Terming it as the portrait of bravery, Vogue tweeted the following from its official handle: “As the war in Ukraine enters a critical new phase, the country’s First Lady, Olena Zelenska, has become a key player— a frontline diplomat and the face of her nation’s emotional toll.”

Countless women (both within and outside Ukraine) have joined the Sit Like a Girl initiative by posing similarly on Instagram and Twitter, including police officers, artists, journalists, and players.

While calling out the misogynistic backlash against Olena, Ukrainian journalist Zoya Zvynyatskivska started the #SitLikeAGirl hashtag on Instagram to encourage women to sit in the same pose to challenge women stereotyping and support the First Lady

Incidentally, though many agreed that Olena sent an important message (that although the Ukrainians might appear tired, they are still standing their ground), the inlying context of the photoshoot fell flat on some, and they came out against Mrs. Zelensky. While one user said that it was inappropriate for women to sit like this, more so for the First Lady, another pointed toward her hair and said that her hair was too glamorous for wartime.

Further, the photos published by Vogue have garnered criticism for other purposes as well, including from Ukrainians who said that Olena has stolen the spotlight from women who have or are actually fighting on the front lines. It was also said that President Zelenskyy was trying to promote a personality cult around himself. Mr. Zelenskyy appeared with his wife in many of the photos in Vogue. The photoshoot was also termed war propaganda by the critics. One of the critics asked in The New York Times whether the magazine was romanticizing war and if the First Lady was weaponizing glossies.

According to experts, the majority of the criticism appeared to be coming from Russia and its proxies or from the people who were critical of their respective government’s support of Ukraine, especially in the United States, the UK, Germany, and Italy.

Apparently, the photo shoot became a good opportunity for those who are against the West’s overwhelming support of Ukraine to voice their criticism and give the impression that the country does not need any help since they were being Gama and doing Vogue photoshoots.

Lauren Boebert, a Republican Congresswoman, voiced the exact same words in a tweet: “While the U.S. is sending billions of aid to Ukraine, Zelenskyy is doing photoshoots for Vogue Magazine. These people think we are nothing but a bunch of suckers.”

While it was said that Vogue was not the right vehicle for Olena to send the message that she intended while speaking with BBC, the Ukrainian First Lady said that she is trying to use every opportunity to speak about her country, “millions of people read Vogue. … And to be able to speak to them directly, that was my duty.”

The First Lady further said that it is important for Ukrainian women to speak up, “because not only are the woman leading the way for the country to be more seen and more heard, but they’re also standing up for themselves in the face of criticism and stereotyping at a crucial time.”

Indeed, women around the world using the hashtag #SitLikeAGirl by posing in a similar manner as the Ukrainian First Lady did in the Vogue cover is a way to challenge female stereotypes that still plague the world. As the Slovak Minister of Justice Mária Kolíková said, “It points out the senselessness of standards of behavior expected of women.”

Gay Sex is No Longer a Crime in Singapore