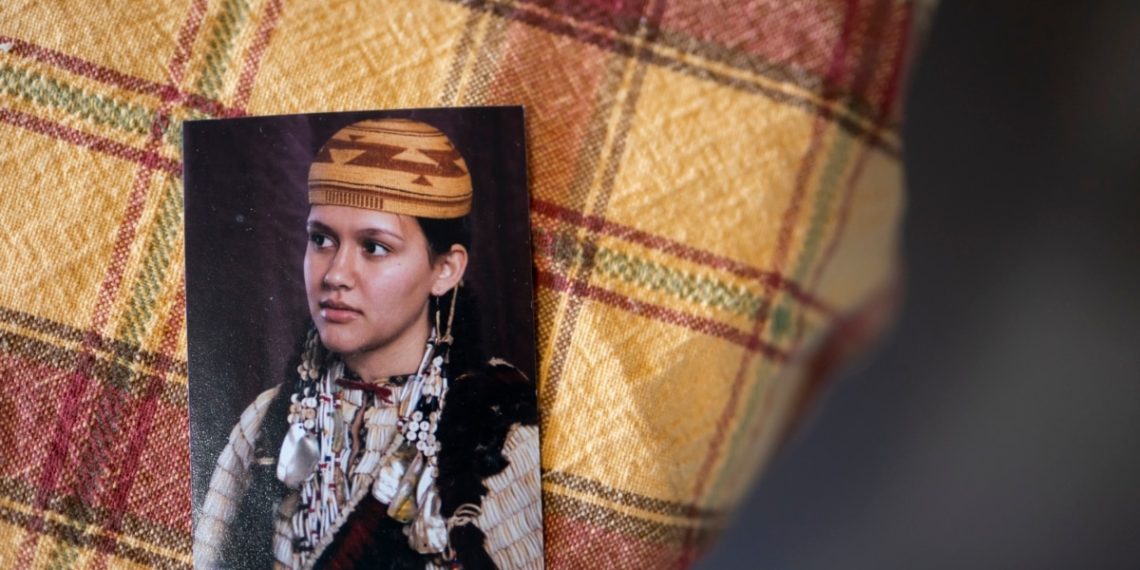 A picture of missing woman Emmilee Risling sits on a table at the Risling family home on Jan. 21, 2022, in McKinleyville, California. (AP)

Emmilee Risling, a young mother, had been behaving strangely for several months. She was seen hitchhiking and wandering naked through two Native American reservations (places reserved for Natives in the US) and a small town clustered along the rugged Lost Coast in Northern California.

According to a report, things started worsening when the 33-year-old Native woman was charged with arson for igniting a fire in a cemetery. Emmilee’s family hoped that the case would compel her into mental health and addiction services. Contrarily, the woman was released over the pleas of loved ones and a tribal police chief.

Emmillee is a college graduate, an accomplished traditional dancer with ancestry from three area tribes. She was last seen walking across a bridge near a place marked End of Road, a far corner of the Yurok Reservation. No one has seen her since her disappearance, which is one of five instances in the past 18 months where Indigenous women have gone missing or been killed in an isolated expanse of Pacific coastline between San Francisco and Oregon, a region inhabited by the Yurok, Hupa, Karuk and Wiyot people for millennia.

Such mysterious disappearances of women of their tribe have spurred the Yurok community to issue an emergency declaration. At the same time, it has brought increased urgency to efforts to build California’s first database of such cases and regain sovereignty over key services. The recent cases spotlight an epidemic that is difficult to quantify but has long disproportionately plagued Native Americans.

A 2021 report by a government watchdog found the true number of missing and murdered Indigenous women is unknown due to reporting problems, distrust of law enforcement and jurisdictional conflicts. The fact, however, is that Native women face murder rates almost three times those of white women overall — and up to 10 times the national average in certain locations, according to a 2021 summary of the existing research by the National Congress of American Indians.  Like many cases involving Indigenous women, Emmilee’s disappearance has gotten no attention from the outside world.

In the coastal area where Emmilee was last seen, almost everyone knows someone who has disappeared. In the state of California, the Yurok Tribe and the Indigenous-run group Sovereign Bodies Institute uncovered 18 cases of missing or killed Native American women in the past year. They believe that the number is far lower than the actual count. An estimated 62% of those cases are not listed in state or federal databases for missing persons.

In fact, Emmilee was born into a well-known Native family. She had a bright future ahead of her. At the age of 15, she walked down the National Mall in Washington, D.C., with other tribal members at the opening of the Smithsonian’s National Museum of the American Indian. Emmilee also received a financial award to attend the University of Oregon. There, she helped lead a Native students’ group. During college, she was in an abusive relationship with a Native man. Later, she became pregnant from another man and returned home to Northern California to have her baby.

Over time, her family says, they noticed changes in Emmilee. Her behavior became difficult to understand. Eventually, her son was taken from her care. She got involved with another abusive man and had a daughter who was also taken from her care. Even her parents were shocked by her fast decline. Though they think she developed a mental illness, the only in-patient mental health center close to her home was always too full to admit her.

However, many people consider Emmilee’s story as the ugly intersection of generations of trauma inflicted on Native Americans by their white colonizers, the marginalization of Native peoples and tribal law enforcement’s lack of authority over many crimes committed on their land. Virtually all of the area’s Indigenous residents, including Emmilee, have ancestors who were shipped to boarding schools as children and forced to give up their language and culture as part of a federal assimilation campaign. Further back, Yurok people spent years away from home as contract servants for colonizers.

Recent efforts at the state and federal level seek to address what advocates say have been decades of neglect regarding missing and murdered Indigenous women.

Former President Donald Trump signed a Bill that required federal, state, tribal and local law enforcement agencies to create or update their protocols for handling such cases. And in November 2020, President Joe Biden signed an executive order to set up guidelines between the federal government and tribal police that would help track, solve and prevent crimes against all Native Americans. A number of states, including California, Oregon, Washington, and Arizona, are also taking on the crisis with greater funding to tribes, studies of the problem, or proposals to create Amber Alert-style notifications.

Emmilee’s case illustrates some of the challenges. She was a citizen of the Hoopa Valley Tribe and was arrested on its reservation, but she is presumed missing on the neighboring Yurok Tribe’s reservation. The Yurok police are in charge of the missing persons probe, but the Humboldt County Sheriff’s Office will decide when to declare the case cold, which could trigger federal help.