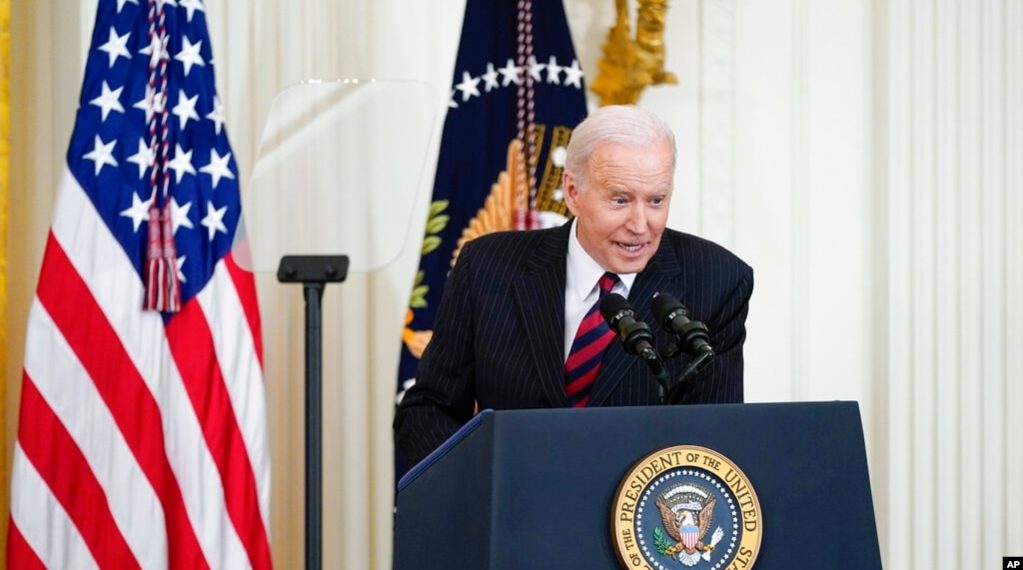 President Joe Biden speaks during an event to celebrate Equal Pay Day and Women's History Month in the East Room of the White House, in Washington, March 15, 2022.

The Biden administration commemorated Equal Pay Day Tuesday amid pay disparities among men and women. Equal Pay Day symbolizes how far into the year women must work to earn what men earned in the previous year. In 2021, the day was commemorated on March 24.

Equal Pay Day was created by the National Committee on Pay Equity (NCPE) in 1996 as a public awareness event to illustrate the gap between men’s and women’s wages. Originally, it was called “National Pay Inequity Awareness Day” and was changed to Equal Pay Day in 1998.

Speaking on the occasion, President Joe Biden announced a series of actions to improve pay equity and transparency in the federal workforce. He proposed a regulation that would prevent federal agencies from using a job applicant’s salary history in the hiring process. Biden said that banning the use of salary history can help break the cycle of potentially discriminatory pay that can follow women and workers of color from job to job.

In a statement issued by the White House, the President said, “It’s my hope that this sets an example for all private companies to follow as well.”

Studies show that on average, American women still earn 83 cents for every dollar earned by a man. The disparities are even greater for Black, Native American, and Latina women, as well as some Asian women.

A member of the Economic Policy Team at the Center for American Progress, Rose Khattar said, “The existence of low-quality work or work that is low wage and without access to critical benefits such as paid leave and the concentration of women, particularly women of color, in this work, is the biggest contributor to the pay gap”.

Research shows that the situation worsened during the Covid-19 pandemic. Women, who perform the majority of unpaid family caregiving, have to deal with greater challenges managing work and care, with children home from school and older family members losing access to critical care services. In addition, women workers are overrepresented in industries that experienced the pandemic’s worst job losses, such as hospitality.

“Women, particularly women of color, are overrepresented on lower-wage jobs, on front-line jobs and jobs that we would have thought of as kind of essential workers throughout the pandemic,” Adrienne Schweer, who leads the Bipartisan Policy Center’s Paid Family Leave Task Force, said. According to her, women have less mobility throughout their careers and less opportunity to increase their wages than their male counterparts.

Meanwhile, the Department of Labor issued a report on occupational segregation on Tuesday showing that in 2019, Black women lost $39.3 billion and Hispanic women lost $46.7 billion in wages compared with white men because of differences in industry and occupation.

According to some experts, mandating paid leave for new parents could help narrow the gender pay gap. The United States is the only developed country that does not have a national paid parental leave program. Only 23 percent of private-sector workers have access to paid family leave. One in four women in America are said to go back to work within 10 to 14 days of giving birth, which is astonishing and awful; it is terrible for working women.

President Biden’s proposed Build Back Better Act sought to provide national paid family leave, but the massive $2 trillion social spending bill is struggling in Congress, failing to gain support not only from Republicans, but also from Democratic Senator Joe Manchin. It has really fallen off the cliff and it needs a bipartisan pathway.

Mary Pittman among the Top 25 Women Leaders in Healthcare

How Your Genes Impact Your Risk for Common Health Issues