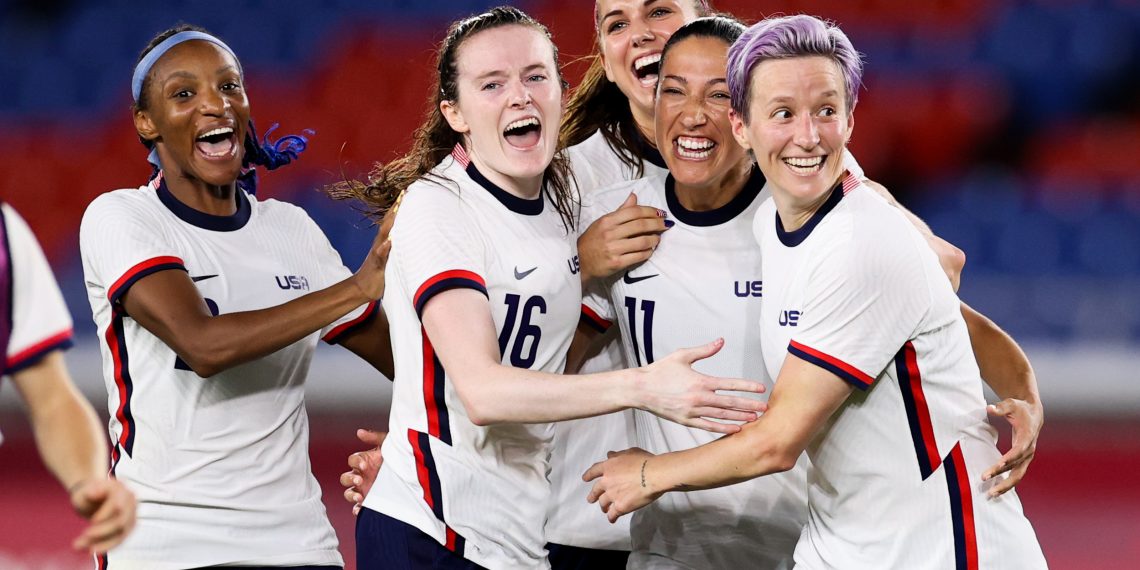 YOKOHAMA, JAPAN - JULY 30: Rapinoe Megan #15 of United States celebrates the victory after penalty shot out of the Women's Quarter Final match between Netherlands and United States on day seven of the Tokyo 2020 Olympic Games at International Stadium Yokohama on July 30, 2021 in Yokohama, Kanagawa, Japan. (Photo by Zhizhao Wu/Getty Images)

The United States women’s soccer team reached a landmark settlement with its governing body on February 22 to end a six-year legal battle over equal pay. Aside from securing a pledge from the US Soccer Federation to equalize the pay for the men’s and women’s national teams in all competitions, the team won $24 million bonuses that match with those of the men’s team.

However, the women’s team received only one-third of what they had claimed in damages. On the other hand, US Soccer has agreed to establish a fund of $2 million that will benefit the players in their post-soccer careers as well as charitable efforts to support the sport for women.

A joint statement issued soon after the agreement on February 22 said, “US Soccer has committed to providing an equal rate of pay going forward for the Women’s and Men’s National Teams in all friendlies and tournaments, including the World Cup.”

The equal pay settlement was a triumph for the women soccer players, who had encouraged fans to chant “Equal Pay!” after winning their second straight World Cup title in France in 2019. Five American soccer stars led by Rapinoe and Alex Morgan began the challenge with a complaint to the federal Equal Employment Opportunity Commission back in April 2016. Women sued three years later, seeking damages under the federal Equal Pay Act and Title VII of the Civil Rights Act.

In May 2020, a US district court judge in California threw out the players’ claims for equal pay but allowed their claims about playing conditions to go forward. The two sides – the men’s and women’s soccer teams, settled the working conditions portion in December 2020, dealing with issues such as charter flights, accommodations, and playing surfaces.

It was also a victory for US Soccer president Cindy Parlow Cone, a former player who is the head of the US Soccer Federation from March 2020. Cindy Parlow Cone had replaced Carlos Cordeiro, who quit after the federation on March 12, 2020, made a legal filing claiming that women possess less physical ability and responsibility compared to their male counterparts. The question of World Cup prize money had formed an important part of the lawsuit filed by the US women’s soccer team three years ago, which accused the federation of “stubbornly refusing” to pay its male and female players equally.

The lawsuit filed by women soccer players in 2019 lawsuit cited the incongruity in World Cup prize money payments paid to the men’s and women’s teams in 2014 and 2015. While the US men received $5.375 million for reaching the round of 16 at the 2014 World Cup, the women received just $1.725 million for winning the 2015 tournament.

The US women’s team has won four World Cups since the program’s start in 1985. Contrary to this, the men’s team has not reached a semi-final since 1930.

The February 22 settlement is contingent on a new collective bargaining agreement, which needs to be ratified before the deal can be finally approved by a court.