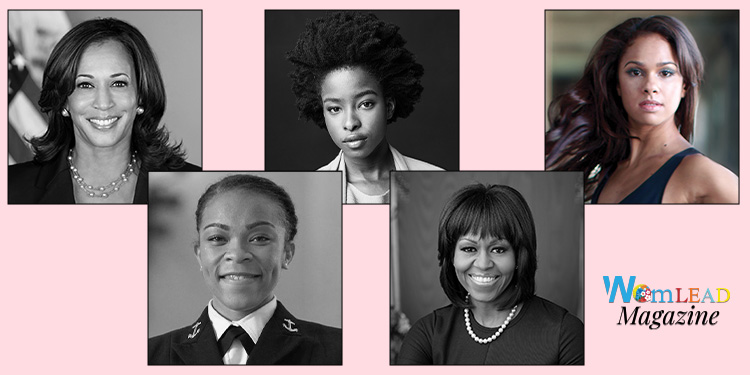 Women’s voices no longer need validation. They instill love, joy, fulfillment, and satisfaction on their own. They take control of their destiny and future, strengthening their self-esteem and empowering others to do the same.

“A woman with a voice is, by definition, a strong woman.”-Melinda Gates

Aspen Institute states, “Black girls need to know that they matter. They need to see examples of success, leadership, achievement, sisterhood, and humanitarianism in abundance so that they can gain confidence in their ability to become their best and greatest selves”.

Don’t we all agree in today’s day and age, we can see those examples and role models around us. Let’s discuss some of the notable women who changed the narrative of what it means to be a Black woman.

Kamala Harris is the 49th Vice President of the United States who represented California in the U.S. Senate from 2017 to 2021 and served as the state’s Attorney General from 2011 to 2017. She is the first Black woman to have been elected Vice President. She overcame the countless barriers of race and gender and stood tall, representing not only Black women but also women in general. She became a symbol of growth and modernity, advocating for countless causes.

21-year-old Sydney Barber became the first Black female brigade commander at the U.S. Naval Academy. She will be leading 4,500 midshipmen in the brigade’s daily activities and professional training with her degree in mechanical engineering and, as expected, commissions as a Marine Corps ground officer in May.  New York Times introduced her as a Black woman who will change the school’s 175 years history. In an interview with, CNBC, Barber hoped to open doors for the women coming after her and help them to thrive in this untouched area of expertise.

Amanda Gorman is an American poet and activist. She was the first person to be named National Youth Poet Laureate. She delivered her poem “The Hill We Climb” at the inauguration of U.S. President Joe Biden. Her works focus on issues of oppression, feminism, race, marginalization, and the African diaspora. She became an icon for young poets and continues to support the causes. She aspires to be a Human Rights Activist setting up goals for the youth.

Michelle Obama is an African-American attorney and author who served as the first lady of the United States from 2009 to 2017. She is the first and only African-American woman to serve as First Lady. She continues to voice her opinions with her podcast and has recently signed a deal with Netflix to produce films and documentaries focused on democracy, race, class, and more.

Misty Danielle Copeland is an American ballet dancer for American Ballet Theatre (ABT). She became the first African-American woman to be promoted to principal dancer in ABT’s 75-year history in June 2015. She has written two autobiographies and other books, including a children’s picture book titled Firebird, with illustrator Christopher Myers. The book sends a strong message of empowerment for young people of color. She actively uses her YouTube for fundraisers. Recently, it contributed to Covid-19 Relief fund and other art & dance funds. She has become an icon in the dance community and has inspired young women to come out of their shells and embrace the non-traditional way of living.

Women play a disproportionate role in the world but, they are setting living examples to see through and learn. They act as an inspiration and motivate one to be better. As Maya Angelou said, “You may not control all the events that happen to you, but you can decide not to be reduced by them,” being a Black woman was your destiny but, exploring to be a greater one is your choice. Having said that, be it entrepreneurship, politics, poetry, military, or dance, no matter which field you choose, you will find a role model for you. If not, become one yourself as women are powerful and brilliant; robust and competitive; exhilarating and motivational.

As Madame C.J. Walker said, “Don’t sit down and wait for the opportunities to come. Get up and make them,” it is high time to look inside and find your inner voice. Dear woman, you deserve to be heard and appreciated. Your opinions matter, and how you put your skillset to use also matters; you can be the next name on this list. Get started today!