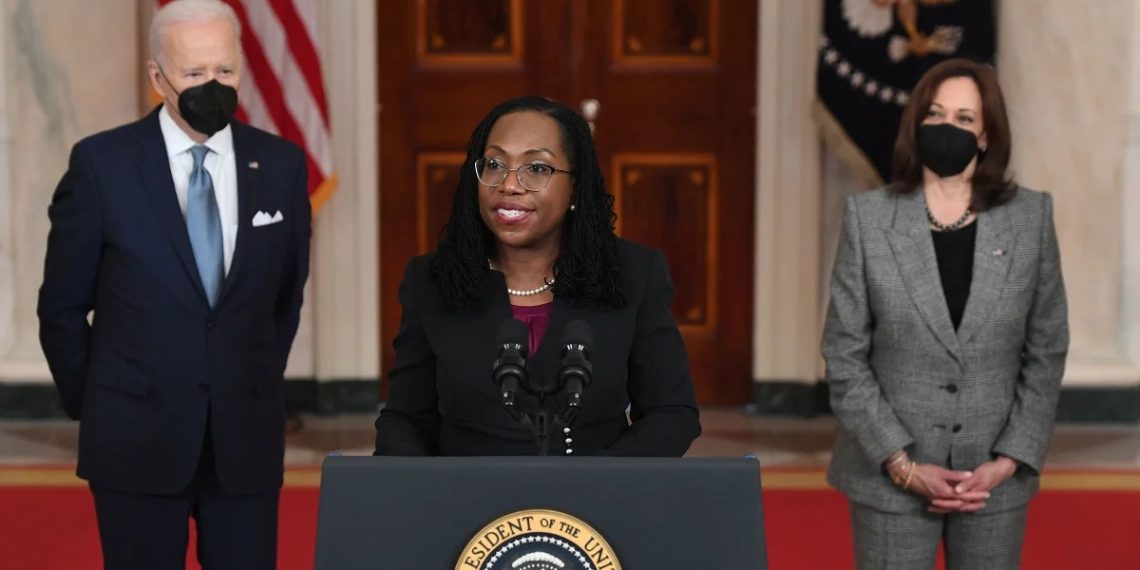 President Biden made history, nominating Ketanji Brown Jackson to the U.S. Supreme Court. She is the first Black woman to be nominated.

President Joe Biden nominated Judge Ketanji Brown Jackson to the Supreme Court on February 25, describing her as “one of the brightest legal minds in America” with an “independent mind, uncompromising integrity, and a strong moral compass”. If confirmed, Jackson will be the first Black woman judge to serve on the US Supreme Court bench in its 233-year history.

Today, as we watch freedom and liberty under attack abroad, I’m here to fulfill my responsibilities under the Constitution, to preserve freedom and liberty here in the United States of America,” Biden said at the White House as he introduced Jackson.

“For too long, our government, our courts haven’t looked like America,” Biden said. “I believe it’s time that we have a court that reflects the full talents and greatness of our nation with a nominee of extraordinary qualifications, and that we inspire all young people to believe that they can one day serve their country at the highest level.”

Jackson, 51, currently sits on DC’s federal appellate court and had been considered the front-runner for the vacancy since Justice Stephen Breyer announced his retirement in June. Soon after her nomination, Jackson said she was “humbled” by the nomination.

Speaking on the occasion, Jackson said, “I must begin these very brief remarks by thanking God for delivering me to this point in my professional journey. My life has been blessed beyond measure and I do know that one can only come this far by faith.”

“Among my many blessings, and indeed the very first, is the fact that I was born in this great country,” she added. “The United States of America is the greatest beacon of hope and democracy the world has ever known. I was also blessed from my early days to have had a supportive and loving family. My mother and father, who have been married for 54 years, are at their home in Florida right now and I know that they could not be prouder.”

Judge Jackson has two degrees from Harvard University, which she attended as an undergraduate and as a law student, and once served as editor of the Harvard Law Review. Jackson has said when she told her high school guidance counselor, she wanted to attend the prestigious Ivy League school; she was warned not to set her sights so high.

Meanwhile, with the Senate divided 50-50 between the parties, Democrats have just enough votes to confirm President Biden’s choice. Vice President Kamala Harris has the deciding vote in the case of a tie. Justice Breyer’s replacement would not shift the court’s current 6-3 conservative majority.

It is worth mentioning here that the Supreme Court plays a key role in American life and is often the final word on highly contentious laws, disputes between states and the federal government, and final appeals to stay executions. For any Supreme Court justice nomination, the President first chooses his preferred candidate and the Senate then votes to confirm that nominee, which requires a simple majority.

Senate Majority Leader Chuck Schumer said Senate Judiciary Committee will begin hearings “in the coming weeks”. Senate Majority Leader Chuck Schumer has indicated that he wants to push a nominee through the process quickly, using Supreme Court Justice Amy Coney Barrett’s Senate proceedings as a model for Jackson’s confirmation timeline. And Sen. Dick Durbin, the chairman of the Senate Judiciary Committee, said that he expects to have a hearing within a few weeks of the selection. The goal of the leadership is to have the nominee confirmed by the April 11 recess.

Biden first promised to nominate a Black woman to the top court two years ago while campaigning for the Democratic presidential nomination. Jackson’s nomination is historic for more than one reason. If she is confirmed, four women will sit together on the nine-member court for the first time.

Black women comprise roughly 3% of the federal judiciary, according to data from the Federal Judicial Center, the court system’s research arm. There have been just two Black Americans on the Supreme Court to date. Justice Thurgood Marshall was nominated by President Lyndon Johnson in 1967 and Justice Clarence Thomas, who still sits on the court, was nominated by President George H W Bush in 1991.