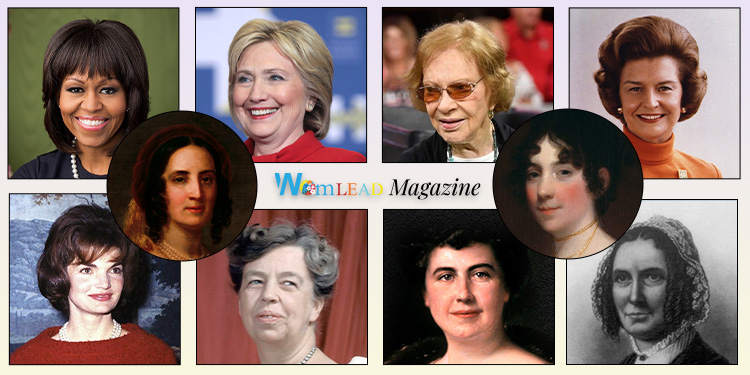 Behind every President, there has been an unelected, unpaid woman who contributed greatly in their accomplishments.

Throughout history, various Presidents’ wives used the position to effect change at the White House, the country, and the world. Several of these women took on the role reluctantly, and many suffered family tragedies, serious illness, death, and the burden of war during their term.

According to Jackie Kennedy, who is one of the most beloved First Ladies, “Presidents’ wives have an obligation to contribute to nation-building and the welfare of its people.” But what that “something” is tends to vary greatly from one First Lady to another and is likely to be “something” radically different when the country has its maiden First Gentleman.

Two prominent first ladies, Dolley Madison and Eleanor Roosevelt are credited for strengthening the role. Madison viewed the public as her constituents, and Roosevelt asserted a stronger presence of political involvement, voicing her views on issues of social welfare and justice.

A few First Ladies also played vital roles in their husband’s administration, working alongside the President to help enact policies. As a result, the role of the First Lady has evolved over the years. Each First Lady discussed below used their position and influence to institute changes in our nation.

First Lady Dolley Madison, the wife of American President James Madison and a renowned Washington socialite, was 17 years younger than her husband. Even today, she remains among the most loved First Ladies. Having served as the White House hostess during Thomas Jefferson after his wife died, Dolley Madison became the First Lady when her husband won the presidency. She was very active in creating weekly social events and entertaining dignitaries and society. During the War of 1812 as the British were closing in on Washington, Dolley realized the importance of the national treasures housed in the White House and declined to leave without saving as much as she could. Many items were saved through her efforts, which would have otherwise been destroyed when the British captured and burned the White House.

Sarah Childress Polk, the wife of President James K. Polk, was a very well-educated woman who attended one of the few higher education institutions available to women in her time. After becoming the First Lady, she utilized her education to assist her husband. She even wrote the speeches and correspondence for James Polk. Taking her duties as Frist Lady of America earnestly, Polk also turned to Dolley Madison for the latter’s advice. As she kept both leaders of Democrats and Republicans amused, Sarah was respected all through America.

Abigail Fillmore, nee Powers, was among the teachers of her husband and America’s 13th President Millard Fillmore. She was even two years older than her husband. Fillmore had a love for learning, which she shared with her husband. In fact, she was responsible for setting up the White House library and helped in selecting books for the library even while it was in the design stage. Interestingly, there was no library in the White House before Fillmore set up one, as the Congress was apprehensive that it would make the President very powerful. However, Congress appropriated $2,000 for the library at the instance of the First Lady after Millard Fillmore assumed office.

President Woodrow Wilson married Edith Bolling Wilson on December 19, 1915after the death of his first wife Ellen Louise Axton in 1914. When the President suffered a stroke in 1919, Edith Wilson virtually took over the presidency. She not only took the daily decisions but also decided what issues should or shouldn’t be taken up for a consultation with her husband. If she did not deem something to be important, she did not take it up for her husband’s put. While Edith Wilson was widely criticized for this, there is no record to suggest how much power she actually wielded.

Many Americans consider Eleanor Roosevelt, wife of President Franklin Roosevelt, to be the most inspiring as well as influential First Lady of the United States. As the First Lady, Eleanor Roosevelt fought for civil rights, rights of women, and New Deal proposals. She firmly believed that everyone should be able to access education and equal opportunities. After the death of her husband, she joined the National Association for the Advancement of Colored People (NAACP) board of directors. After the end of World War II, Elena Roosevelt along with others helped in the formation of the United Nations.

Born as Jacqueline Lee Bouviee in 1929, she attended the Vassar and subsequently the George Washington University where she earned her graduate degree in French. She married President John F. Kennedy in 1953 and as, the First Lady, spent most of her time refurbishing the White House. After that was complete, she took the nation on a televised tour of the White House.

Betty Ford married President Gerald Ford in 1948. She was a prominent advocate of the Equal Rights Amendment and legalizing abortion. She not only spoke openly about her experience with psychiatric treatment but also about a mastectomy she underwent. She was at the forefront in spreading awareness of breast cancer. In fact, Betty Ford’s openness about her private life was unprecedented for any First Lady of America.

Born as Eleanor Rosalyn Smith in 1927, she married President Jimmy Carter in 1946. Rosalynn Carter remained President Carter’s closest advisor throughout his term in office. She was different from the previous First Ladies, as she even attended many of the Cabinet meetings. Rosalynn Carter was a strong advocate of mental health issues and was also appointed the honorary chair of the President’s Commission on Mental Health.

Hillary Rodham married President Bill Clinton in 1975 and was one of the most powerful First Ladies America has seen. She took an active role in directing policy, especially in matters relating to healthcare. Hillary Clinton was also appointed the head of the Task Force on National Healthcare Reforms and was a vociferous advocate of issues related to women and children. She championed many important legislations such as the Adoption and Safe Family Act. Following the second term of President Bill Clinton, Hillary Clinton became the junior Senator from New York. She ran for the presidential nomination but was defeated. Later, President Barack Obama appointed her as the Secretary of State in 2016.

Born as Michelle LaVaughn Robinson, she married Barack Obama, the first African-American to become President of the United States. Michelle Obama is a lawyer, businesswoman, and, philanthropist and currently works in the public sphere. As the First Lady, Michelle Obama was dedicated to the “Let’s Move!” program aimed at helping reduce childhood obesity. This program led to the passage of the Healthy, Hunger-Free Kids Act, which allowed the U.S. Department of Agriculture to set new nutritional standards for all food in schools. Her initiative, the “Reach Higher Initiative,” still provides students with guidance and resources to go on to post-high school educations and professional careers.