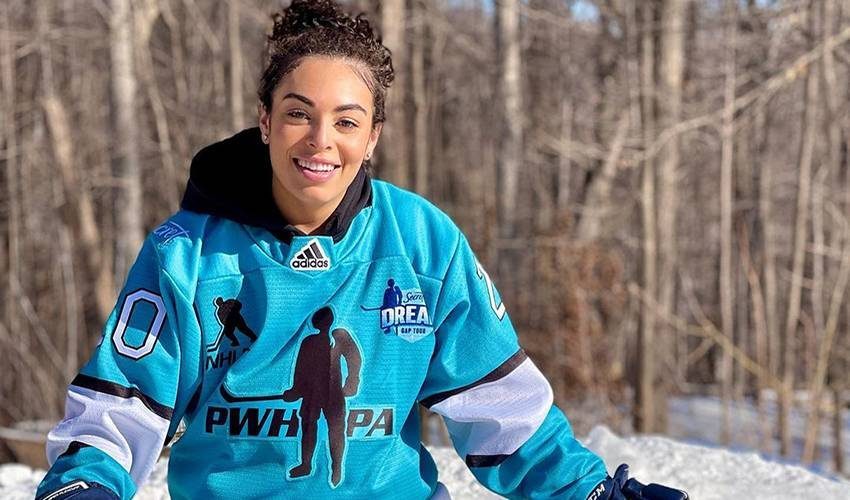 Canadian hockey player Sarah Nurse (27) is set to become the first woman to feature on the cover of EA Sports’ NHL 23. Electronic Arts, a video game franchise, made the announcement on Wednesday that Sarah Nurse, along with Trevor Zegras, will feature on the cover of NHL 23. EA Sports will be further adding, for the first time in its history, the women’s national team rosters from International Ice Hockey Federation to the game.

Nurse issued a press release stating that she was honored to be the first woman to feature on the cover of EA Sports. She further added that Hockey is for everybody, and she is excited that ‘NHL 23’ is celebrating the diversity and inclusivity in the sport. She hoped that the increased representation of women in Hockey would inspire young girls to realize that there is a place for them in the game.

Nurse catapulted to fame during the 2022 Olympics, where she set dual records for most points (18) and most assists (13) in a single tournament and helped Canada secure a gold medal win against the United States.

Hockey runs in the blood of this Canadian phenom and many of her family members have been prominent athletes in the game. Her black father, Roger, played lacrosse in Canada, and her uncle, Richard, was also a CFL wide receiver. Another of her uncles, Donovan McNabb, was a quarterback who played for the Eagles in NFL. Two of her cousins, Darnell and Kia Nurse, are also popular in sports.

Born to a Black father and a White mother in Ontario, Canada, Nurse started playing Hockey at the age of five. A member of the national women’s hockey team in Canada and the Professional Women’s Hockey Players Association (PWHPA), Nurse played for four years at the University of Wisconsin. As a Badger, she helped her team win the WCHA Championship by scoring two goals to defeat Bemidji State.

She debuted in international Hockey in 2015 with the national team at the 4 Nations Cup. In 2018, she also represented Canada at the 2018 Winter Olympics, where she secured a silver medal. She continued to delight her fans with victories after victories and helped Team Canada win the Gold medal game during Winter Olympics in Beijing, 2022, against the United States. Nurse and her team will defend their Gold title in the 2022 Women’s World Championship.

As a Black athlete, Nurse is a strong advocate of diversity and inclusion in Hockey. She has often come out in support of racial equality and has spoken several times about the racism in Hockey. Following the George Floyd protests in 2020, Nurse, citing the discrimination, urged the Canadians not to separate themselves from the racism in the United States.

Nurse has also been a youth icon and is often represented in various forums of the popular culture. In the year 2020, Mattel and Tim Hortons collaborated to create two limited-edition Barbie dolls featuring Nurse and another Canadian hockey player Marie-Philip Poulin. The was a part of Barbie’s You Can Be Anything program, which aimed to inspire girls by engaging with meaningful role models.

Hockey can often be misconstrued to be a male sport, and women in the hockey world often have to prove themselves. When asked about what winning looks like to her, Nurse said winning looks different every day to her. “My motto and mantra is to lean into greatness and never be afraid of greatness.”

When there are a lot of gifted athletes in your family, it’s often a probability that your career path might be mapped out for you. But for Sarah Nurse, it has been her hard work, paired with a natural forte on the ice, that has helped her accomplish so much. It is her dedication that has made her the renowned Olympian athlete and role model that she is today. Nurse no doubt has become a beacon of hope for many and will continue to inspire coming generations through her hard work and success.

Causes of Eating Disorders in Women and How to Help