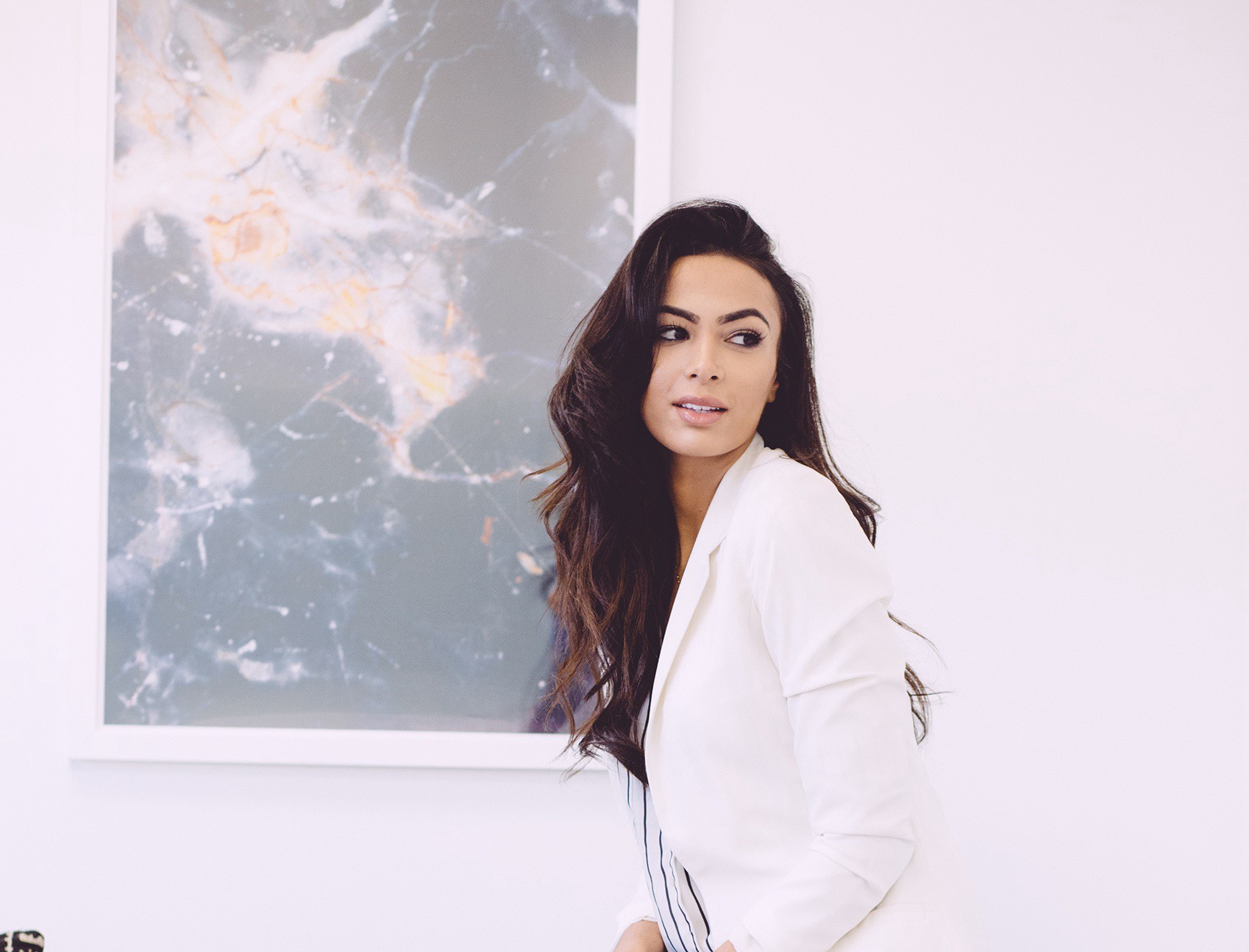 This is HER story.

Iman Oubou is showing women around the world that they can have it all. Iman is a Moroccan American entrepreneur who combines style with success. She is a stunning (literally) example of a woman who has used her diverse heritage and persona to create an empowering environment for herself and other women. Iman moved to Colorado in the United States with her family at the age of 15 years from Agadir, a city in Morocco. She attained a Bachelor’s degree in biochemistry and molecular biology and a Masters in Biomedical Engineering. She worked as a cancer research scientist for a while and also led international medical missions to developing countries. She was set on a career path based on practicing medicine and pursuing research. However, life would mold her in ways she had never imagined, and today Iman is the founder and CEO of Swaay, a female-focused digital publication.

Iman participated in beauty pageants alongside her professional journey and achieved the title of Miss Colorado. Iman’s striking beauty and confidence led her to win the title of Miss New York US in 2015 and later Miss World in 2018. So Iman became a beauty queen. But was her beauty and charm her only identity? Not really.

Iman refuses to be categorized into a single zone, and her life is a clear example of that. “Throughout my life, I never fit into the standard ‘feminine box,’ and I have learned that we need to define our own terms before society defines us,” emphasizes Iman. She decided to break out of the molds beauty queens are conventionally placed into by deciding to launch a media business. However, she encountered many obstacles in her way because most investors met her with a frivolous attitude that frustrated and angered her. “I was told I was too pretty to be a CEO,” recounts Iman.

She struggled to find capital for her business. Iman often felt disheartened and confused with the biased and derogatory outlook of male executives towards women during her interviews and meetings. Most investors did not take her entrepreneurial efforts seriously, and her smart and attractive appearance contributed to the thought process that beauty and intellect cannot exist hand-in-hand. She was even met with suggestions to use her pretty face as a brand to endorse products. Ultimately, she located an investor who had faith in her business acumen. Iman was able to successfully set up her media business eventually using the capital she had generated and with immense hard work and dedication.

A vision for change in how women are perceived is what led Iman to found Swaay, a digital publication in 2016. “While there are many beautiful role models to choose from thanks to Hollywood and social media, there is a need today to spotlight and celebritize women who are making a dent through their businesses and philanthropic endeavors,” stresses Iman. She conceptualized Swaay to address the issues of gender bias in how women are portrayed in the media and to celebrate the power of women entrepreneurship. Iman’s media enterprise extended her views that she was already airing through her popular podcast. ‘Entrepreneurs En Vogue’ is a weekly broadcast hosted by Iman Oubou and Jeremy Hassell that brings successful women entrepreneurs into the spotlight every week. Swaay has a fresh and distinctive voice that stands out from traditional publications and seeks to inspire and propel women ahead in their careers.

Iman is showing women all over the world that they can indeed have it all. She is an unapologetic fashionista, CEO, a scientist, philanthropist, and a dirt bike enthusiast. “I’ve always been categorized in two different corners – I had my beauty pageant life, and I had my scientist-engineer life,” recalls Iman. “And they were two different worlds. When I try to explain to people that those two worlds exist in one person, it’s always been a struggle.” Iman believes that a woman can be stylish and gorgeous as well as competent and confident in business dealings. Iman rightly muses that a smartly-attired man is viewed as impressive, but the intelligence of a woman who chooses to be stylish is often undermined.

Iman’s publication, Swaay is changing the game one woman at a time. The goal is that women must be presented with the same opportunities and respect that their male counterparts are afforded. It comes as no surprise that Iman was chosen to be a part of the prestigious first-time-ever jury consisting of only women for the Miss Universe pageant held in 2018. Notably, she was also the first Moroccan member of the pageant’s panel of judges. The future of women entrepreneurs is bright with Iman at the forefront of the digital revolution for women empowerment.

How Executives Can Use NOW Power