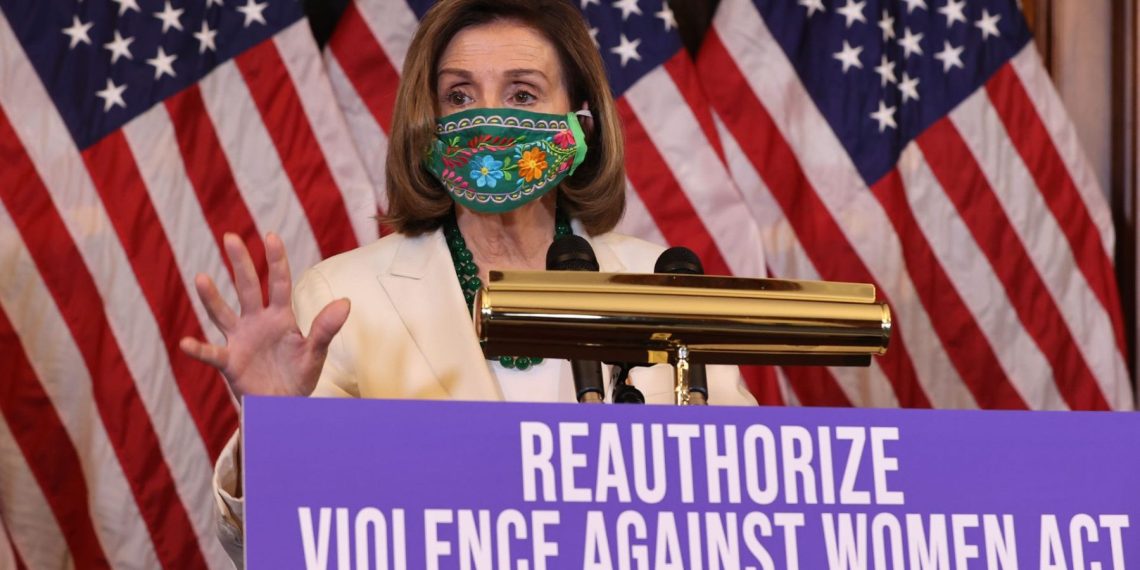 House Speaker Nancy Pelosi speaks during a news conference about the renewal of the Violence Against Women Act on March 17. (PHOTO BY CHIP SOMODEVILLA/GETTY IMAGES)

The United States Congress voted to reintroduce a lapsed law that aims to prevent domestic violence, stalking, and sexual assault on Wednesday, by reauthorizing the Violence Against Women’s Act (VAWA). Renewing the law is said to be of great importance for President Joe Biden.

The measure was a part of the huge $1.5 trillion spending package for funding the US government till September 2022. Biden had first written the law in 1994 when he was a member of the Senate. It expired during the tenure of President Donald Trump in 2019. It remained in languish despite President Biden consistently urging Congress to renew the law and strengthen the protection of women facing violence.

Now the legislation will go to the Senate, where it is expected to pass and become law again.

Majority leader Senator Chuck Schumer has issued a statement saying, “The expiration of the Violence Against Women Act three years ago had put several lives in jeopardy. It is very good news that the law is finally being reauthorized.” Senator Schumer described the legislation as “one of the most important laws passed by the Congress in the last three decades.”

The legislation was introduced by a group of bipartisan Senators aims to enhance protection of survivors of sexual assault and domestic violence. At the same time, it will ensure that the survivors are provided with additional resources and training programs for enforcement of the law, fund the rape crisis centers, and increase access to legal services for the survivors. The legislation will also provide many other benefits to the survivors.

Once the legislation is passed by the Senate, the federal government will need to notify state as well as local law enforcement authorities when any convicted domestic abuser lies during a background check in an unlawful attempt to buy a gun.

Through the Violence Against Women Act expired three years ago, Congress has continued to fund many of its programs. The spending bill would provide $575 million in funding for the measure’s prevention and prosecution programs.

The renewal of the Act’s has taken on additional urgency owing to the alarming rise in domestic violence which has coincided with the spread of the Covid-19 pandemic. According to sociologists, instances of domestic violence often increase during the periods when families spend more time together.

Nevertheless, in spite of that increase in instances of domestic violence, and the undisputed nature of many of the programs, negotiations on the measure became ensnared in some severe partisan disputes. Democrats have sought to add provisions that would restrict access to firearms by people convicted of violent crimes. That triggered a hostile pushback from the conservative Republicans, who don’t want any curb on gun rights.

Succumbing to the pressure from the Republicans, Democrats finally dropped what many considered a key provision to close what is known as the “boyfriend loophole,” which would prohibit dating partners, not just spouses, from owning guns if they had been convicted of domestic violence. In 2021, the House had passed its own version of the reauthorization that included such a provision, winning the support of 29 Republicans.

According to the founder of Moms Demand Action, Shannon Watts, “Because married women aren’t the only victims of domestic violence, we must close the dating partner loophole that puts so many unprotected women and children at risk.” Moms Demand Action is a prominent gun control organization in the United States. Gun violence prevention groups said they planned to press Biden to address the issue through executive action.

However, many other advocates hailed the reauthorization of the Violence Against Women Act as a major victory for gun safety, even without closing the loophole.

“Federal authorities will finally be required to let local law enforcement know when a domestic abuser or other convicted criminal tries to illegally buy a gun, which is a huge red flag for potential gun violence,” said John Feinblatt, the president of Everytown for Gun Safety.