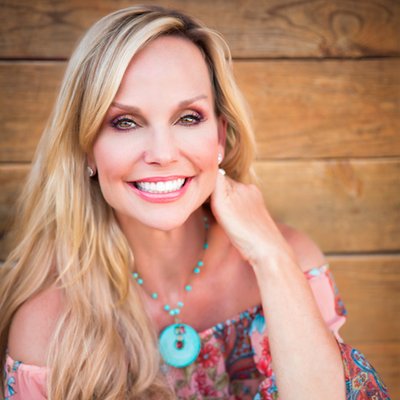 Days of our Lives, CSI Miami, Two and a Half Men – what do these hit shows have in common? Sandra Dee Robinson. She has a successful career as a television and film actress with a recognizable on-screen presence of over two decades. Sandra is not just another talented face onscreen though. She has established her uniqueness by harnessing her passion for personal empowerment into coaching programs that she calls ‘Charisma on Camera’ and ‘Charismatic Cowgirl.’

She coaches individuals who wish to own their personalities and become the best version they can be. Sandra struggled with appearing natural when facing the camera in her early years and hopes to educate and motivate persons from all walks of life to shed their self-doubt and project a confident media image. Sandra is also the author of a nonfiction book called ‘Impact!’ that serves as a guide to developing a powerful personal profile on camera and off. She has also contributed to books such as ‘The Social Agent’ and ‘Wake up Women, Be You’ and the cookbook ‘Kitchen Rescues.’ Sandra Dee is a successful businessperson and more importantly is willing to help others succeed too by assisting them to explore their untapped potential.

1 Welcome Sandra, are you from New York or LA?

I’m originally from Pittsburg, Pennsylvania. I was working in front of the camera when I was eleven as a commercial actor and a model. My dreams of being a supermodel were short-lived since my height was only five foot seven. I transitioned into acting and ended up auditioning in New York City when I was very young, and within a few months, I’m lucky I got my first national show. I worked for several decades doing just that. I was very blessed to do something I found very fun and got paid for it well. But what’s interesting is that acting was a survival mechanism for me.

I teach confidence from the inside out and the ability to carry your message with finesse and effectiveness and authenticity because I had to struggle to do so myself.  Becoming an actor was a way to get paid or rewarded for being someone other than me. I couldn’t talk to fans, and I had trouble walking into a room if I didn’t know somebody. I remember being on national outlets and not being in control of my brand, I didn’t know what my strengths were, I didn’t have the ability to stand up for what I believed in or the causes that were important – I just didn’t even know who I was or that I had any personal value!

If I would go to an audition for hosting an infomercial and was told to ‘just be yourself,’ I would fall to pieces. That happened because I had someone close to me spoke negative things over me. My mother said ‘Life would be better if you hadn’t been born.’ We own the negative things spoken about us for way too long. I’m constantly reading, and I took every opportunity to learn about all types of communication – that includes communication with animals. I think there is so much that we can learn if we look at our natural strengths. We all have it within us, and sometimes when I work with people, it’s just pulling the veil off or deprogramming the beliefs that come from other people that are not true. That’s what I do with myself, and that’s what I help people.

2 You really help people get confidence from the inside out, Sandra. So let’s talk about your approach to bringing out the best communicator in a person and performance coaching – are they different or do they go hand in hand?

Actually, they are opposites – performance is the flower on the tree, and that is just the pretty part of the tree. But what you have to work on is your roots – the foundation of your character, and your natural strengths to communicate. Once you know that, you can start to put the performance on top of it. I work from the inside out or roots up. The first thing I ask is ‘What were you doing when you were six years old that made time stand still?’ Some of the happiest people are still doing something that they loved when they were a kid. When we are happier, we are much more charismatic or positive.

3 That’s magical. When you were modeling, and you were an actor, you had to memorize large scripts. You’ve had to take on a lot of information so what can we do to stay on track, especially for speakers and authors?

I refer to this on my website as ‘high-risk presentations’ – shooting a video important for your business or a keynote lecture. Yes, it can be tough to remember things. If you’re speaking or doing a video for your business that is less than an hour, the chances are that people will remember only one thing out of three bullet points – that’s how the brain works. So give less information and weave the information with stories so that it sticks with people more. I say that because of two reasons – you can remember stories easier than bullet points and say fewer things

Margo Lovett is the creator and host of Her Business Her Voice Her Conversation, a podcast, a business that markets how- to reinvent yourself information, instruction, inspiration to women leaving corporate, looking to become a podcaster, author, entrepreneur . The Missing Element in the Goal Setting Process

MOTIVATION – Not Just a Factor but a Driving Force for Women