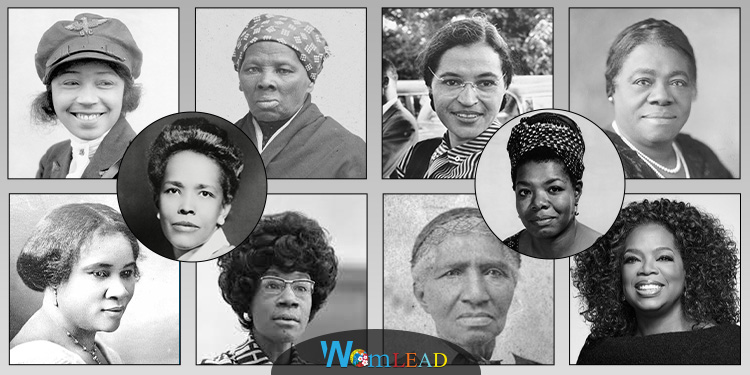 10 Historic Black Figures You Should Know About

Black History Month identifies with prominent Black personalities who’ve made a profound impact in history. African-American history resurfaces every year during February, remembering these courageous people and enlightening and pushing the generations coming after towards a shared goal of excellence. As we are celebrating Black History Month, we would like you to read about 10 historic black figures you should know about and follow.

Without further ado, let’s celebrate and learn from the accomplishments of these great 10 Historic Black Figures you should know about this Black History Month.

1. 10 Historic Black Figures You Should Know About

Maya Angelou was a versatile personality — an author, playwright, poet,  stage and screen performer, director, and human rights activist. She is an icon of Black culture, and her work is viewed as an insight into African-American culture, which often talks about equal rights. She was awarded the Presidential Medal of Arts in 2000 and the Lincoln Medal in 2008, followed by three Grammy Awards and some 50 honorary degrees. Her achievements in the arts and struggle for African-Americans’ rights infuse inspiration in hearts even today. She is a historic black figure for other women.

Ella Baker was African-American civil rights and human rights, activist. She acted as a field secretary and a director of the National Association for the Advancement of Colored People (NAACP), various branches. Later, she worked with the New York branch to integrate local schools and improve the quality of education for Black children. Baker served as a director of the Southern Christian Leadership Conference (SCLC) alongside Martin Luther King Jr. She helped, guided, and encouraged student leaders of college activist groups to organize the Student Nonviolent Coordinating Committee (SNCC) and become the foremost advocate for human rights in the country. Her work remains a tremendous influence on the human rights movement.

Mary McLeod Bethune was an American educator, businesswoman, humanitarian, philanthropist, womanist, and civil rights, activist. She is considered to be a champion of racial and gender equality. She founded many organizations and led voter registration drives after women gained the right to vote in 1920, risking racist attacks. Later, Bethune was elected president of the National Association of Colored Women’s Club. She became the founding president of the National Council of Negro Women in 1935. Along with these, she co-owned a Daytona, Florida resort and co-founded the Central Life Insurance Company of Tampa.  She was honored with many awards, including a memorial statue in Washington DC in 1974 and a postage stamp in 1985.

Rosa Parks was an African-American activist in the civil rights movement. She is regarded highly for her critical role in the Montgomery bus boycott, so much so that the United States Congress honored her as “the first lady of civil rights” and “the mother of the freedom movement.”  The refusal to let go of a Montgomery city bus seat for a white passenger sparked a boycott that ultimately challenged legal segregation in Alabama and laid the ground for the Civil Rights Movement in the U.S.

Harriet Tubman was an American abolitionist and political activist. She is considered the first African-American woman to serve in the military. She acted as a scout, spy, guerrilla soldier, and nurse for the Union Army during the Civil War. She escaped from slavery and helped others gain their freedom as a “conductor” of the Underground Railroad. She later became an activist in the movement for women’s suffrage. After the death of her husband, Tubman established the Harriet Tubman Home for the aged on land near her home.

Madam C. J. Walker is fondly remembered as an African-American entrepreneur, Black America’s first female philanthropist, and a political and social activist. Her entrepreneurial zeal landed her in the Guinness Book of World Records as the first female self-made millionaire in America. She is said to be the greatest benefactor of her race as she climbed the ladder of success herself and helped other women stand on their feet by employing them in her cosmetics business.

She gave back to society by donating to organizations like the National Association for the Advancement of Colored People (NAACP) and African American Young Men’s Christian Association (YMCA). She pledged donations to NAACP’s anti-lynching fund. She also contributed to scholarship funds in many African-American schools and colleges and helped fund many with retirement homes and orphanages.

Bessie Coleman was an early American civil aviator. She was the first African-American woman and the first Native American to hold a pilot’s license. On Labor Day, September 3, 1922, she staged the first public flight by an African-American woman in America. She spoke at schools and churches, and encouraged Blacks’ interest in aviation. She also raised money to fund a school to train black aviators. She remained undaunted by racial and gender biases that inspired Black women and thrived in breaking boundaries.

Shirley Anita Chisholm was an American politician, author, and educator. She became the first Black woman elected to the United States Congress. She is the founder of the National Women’s Political Caucus, which supported the Equal Rights Amendment. She legalized abortions throughout her congressional career, which lasted till 1983. She was awarded the Presidential Medal of Freedom in 2015.

She is an American talk show host, television producer, actress, philanthropist, and author. She is popularly known as the “Queen of All Media.” She was the richest African-American of the 20th century and was once the world’s only Black billionaire. She created Oprah’s Angel Network, which sponsors charitable initiatives worldwide. She opened a US$40 million school for disadvantaged girls in South Africa in 2007. She has been outspoken against child abuse. She received the first Bob Hope Humanitarian Award in 2002 and was also awarded the Presidential Medal of Freedom by President Barack Obama.

Clara Brown was a formerly enslaved woman from Virginia and Kentucky who became a community leader philanthropist and aided the settlement of formerly enslaved people during Colorado’s Gold Rush. She opened her own laundry after doing jobs like cook, midwife, and nursemaid. She was popularly known as Aunt Clara because of her tireless generosity. She was honored by being inducted into the Colorado Women’s Hall of Fame.

The Black women listed here forged their own path despite the obstacles, and they helped many others along the way. They were true heroes of Black history, and the world is grateful for their contributions. We are grateful to have the opportunity to share 10 historic black figures you should know about this Black History Month.